Daily Deal Oculus Quest: the tip of the day is an excellent game mixing squash and futuristic brick breaker! (January 19, 2022)

Parcoursup: the researcher who invented the algorithm explains

United States Hostage taking in Texas: the author was on file with British intelligence

Franziska Giffey in “Early Start”: “The situation is very serious”

Psychology: Clean up the soul – 6 habits that you can confidently clean out

the difficult assessment of the government recovery plan

The Sandbox and the Metaverse

In addition to the success of non-fungible tokens (NFT) globally since the start of the year, “metaverse” such as The Sandbox or Decentraland are not left out, which is how The Sandbox announced the end of its Alpha version and its success with players.

A metaverse is a digital universe in which players can evolve in real time. Often in an open world in 3D format, it is possible to interact with other people. These interactions include trading and buying cryptocurrency as well as exchanging digital items.

Metaverses have been around for years and virtual properties have been traded there for a while, but with the emergence of Web 3.0 as well as the Facebook name change to “Meta”, the price of their tokens has exploded.

Evolution of the SAND token price over one year, with the “Facebook Meta” announcement date circled in red – Source: Coingecko

The Sandbox, a project carried out by two French people, has existed since 2011, but it has only been using blockchain technology since 2018.

Its Alpha version took place during the month of December and saw tens of thousands of players and more than 15,000 NFTs distributed.

👉 To read on the same subject: PwC Hong Kong buys a plot of land in the metaverse The Sandbox

A migration to Polygon

The virtual world of The Sandbox will move from Ethereum to Polygon, a layer 2 or rather sidechain of the Ethereum blockchain (ETH), in order to be able to accommodate more audiences on its platform. Ethereum, which is heavily used and has reached its maximum capacities, has significant fees and transaction times, thus limiting the possibilities.

So, to remedy these problems, the development team decided to migrate to Polygon in order toavoid possible network congestion while being able to ensure minimal transaction costs.

According to Sébastien Borget, co-founder of The Sandbox, the game can be offered to a wider audience once the migration is complete.

Polygon, previously named MATIC (its token retained this name) is a platform running under Polygon SDK and whose objective is to aggregate protocols from Ethereum on higher layers like the Polygon network in order to make the ecosystem less “scattered”. It works with the so-called Proof-of-Stake (PoS) method. 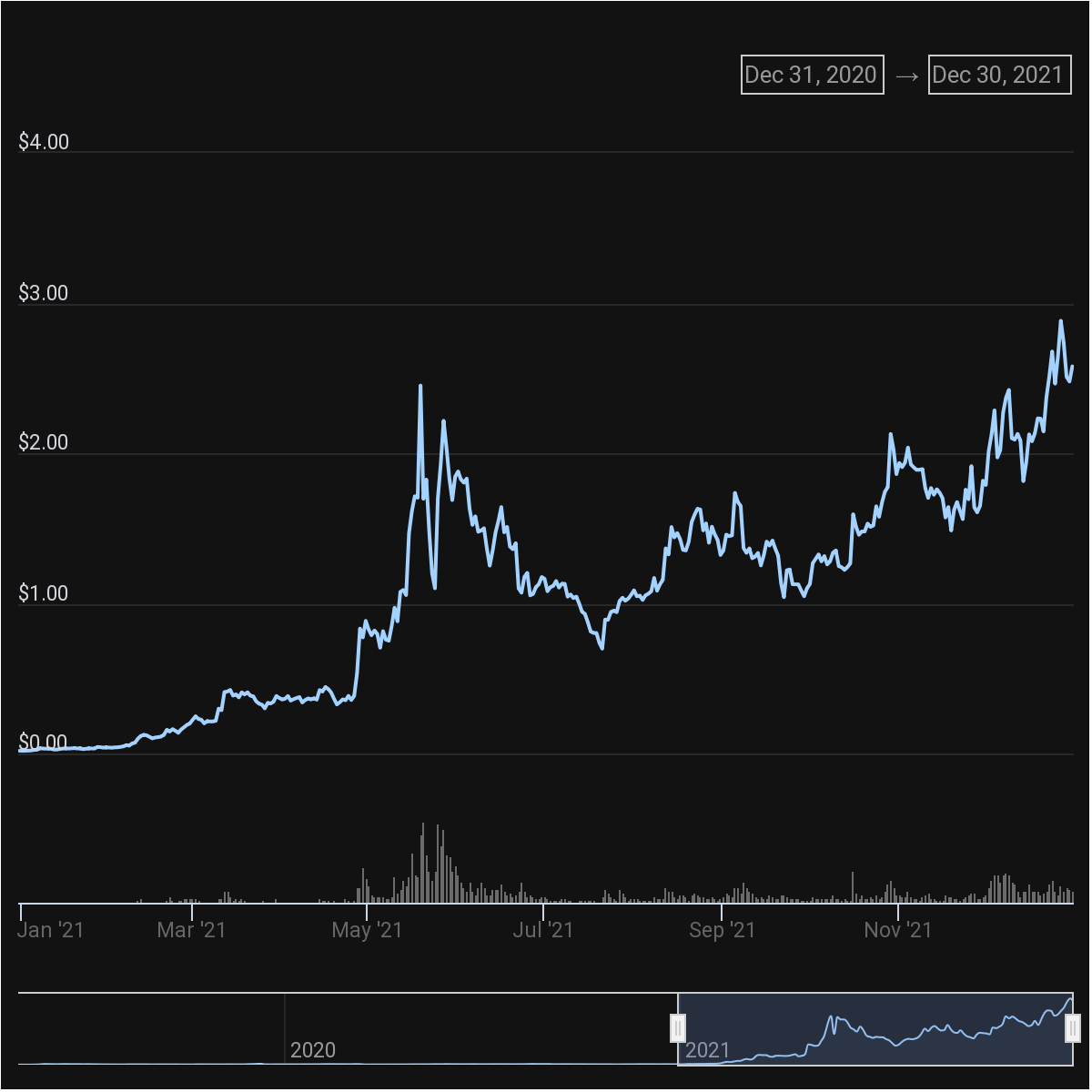 Evolution of the price of the MATIC token over the year 2021 – Source: CoinGecko

Polygon announced the creation of a studio dedicated to video games in July, so adding The Sandbox to its system makes sense.

👉 To find out more: Matic Network renames itself Polygon and adopts a new strategy to support Ethereum

At the end of November, The Sandbox had opened its first Alpha version in which players who purchased an Alpha Pass could gain access to exclusive rewards. For the others, it was possible to try the virtual game in a more limited version.

The test was a great success and the feedback was generally positive according to the game’s official website. 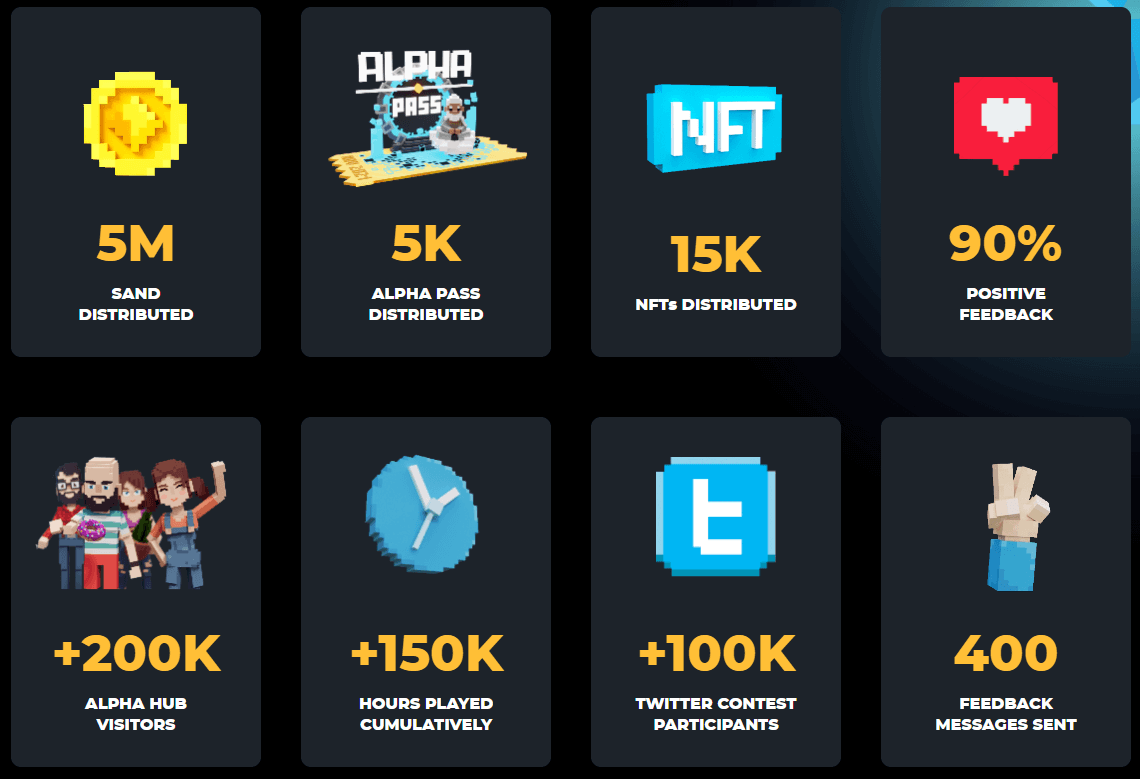 Results and player feedback on the Alpha version – Source: The Sandbox

At present, over 17,000 players have purchased lands in the game, which corresponds to a territory they own in the form of an NFT.

Among them are personalities like Snoop Dogg, DeadMau5, Steve Aoki or even companies like Atari and Adidas. 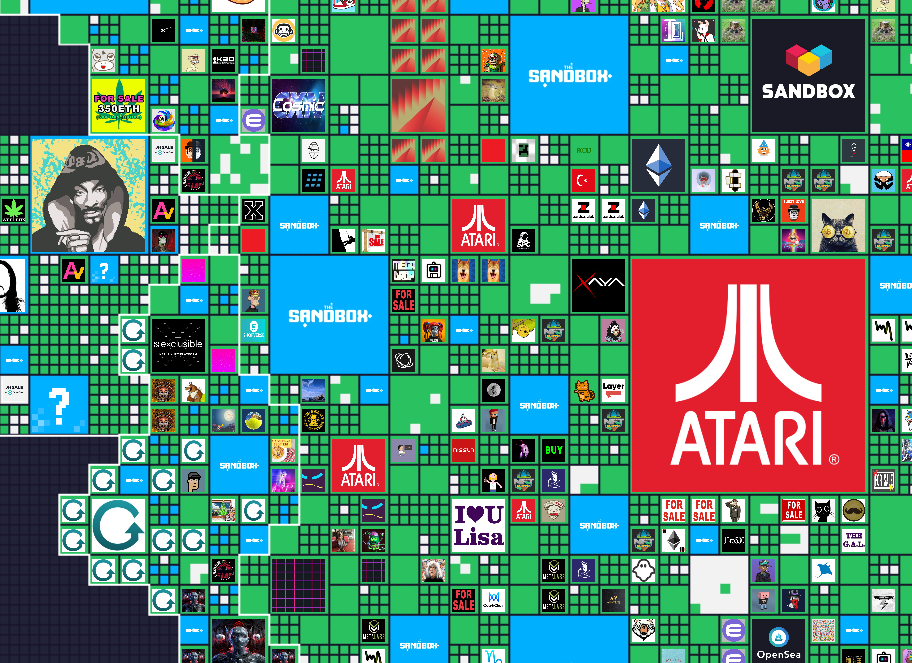 Extract from the map of territories on Sandbox – Source: The Sandbox

“The game will be launched on a larger scale to the public once people who have purchased land are able to build and share their interactive experiences. “

According to him, The Sandbox should continue to open its doors to players in Beta form around every 2 months during the year 2022.

Receive a recap of crypto news every Sunday 👌 And that’s it.

What to know about affiliate links. This page presents assets, products or services relating to investments. Some links in this article are affiliate. This means that if you buy a product or register on a site from this article, our partner pays us a commission. This allows us to continue to offer you original and useful content. There is no impact on you and you can even get a bonus using our links.

Investments in cryptocurrencies are risky. Cryptoast is not responsible for the quality of the products or services presented on this page and cannot be held responsible, directly or indirectly, for any damage or loss caused as a result of the use of a good or service highlighted in this article. Investments related to crypto-assets are risky by nature, readers should do their own research before taking any action and invest only within the limits of their financial capacity. This article does not constitute investment advice.

About the Author : Maximilian Prue

Passionate about the world of decentralized finance and the novelties brought by Web 3.0, I write articles for Cryptoast in order to help make the blockchain more accessible to all. Convinced that cryptocurrencies will change the future very soon.
All articles by Maximilien Prué.