Doubts and criticism are necessary

Heineken: The Heineken brewer under pressure on the stock market, even if beer consumption resists

Alessandro Michele leaves Gucci, after seven years as creative director during which he “greatly contributed to making Gucci what it is today”, but without succeeding in recent years in reviving sales with the same strength than its competitors.

“There are times when paths diverge due to the different perspectives that each of us may have,” said Alessandro Michele in a statement from the Kering Group, owner of the Italian brand which alone accounts for 55% of 17.6 billion euros in group sales posted in 2021.

“The path traveled together by Gucci and Alessandro in recent years is unique, and will remain as an extraordinary moment in the history of the House”, greeted the CEO of the luxury group, François-Henri Pinault. “His passion, imagination, fantasy and culture have helped put Gucci back in the spotlight, where it belongs.”

Alessandro Michele, who will turn 50 on Friday, took over as artistic director from Frida Giannini in 2015 when he had already worked for the brand for 12 years. “A risk-taking at the time, since he was completely unknown”, explained to AFP Serge Carreira, lecturer at Sciences Po Paris within the Master Fashion and Luxury.

1P44MPThe departure of Alessandro Michele “is a surprise”, says Mr. Carreira: “he embodied the new chapter of the Gucci house, committing himself to societal issues, inscribing the brand in his time. He revived the heritage of the house by giving it a modernity”. 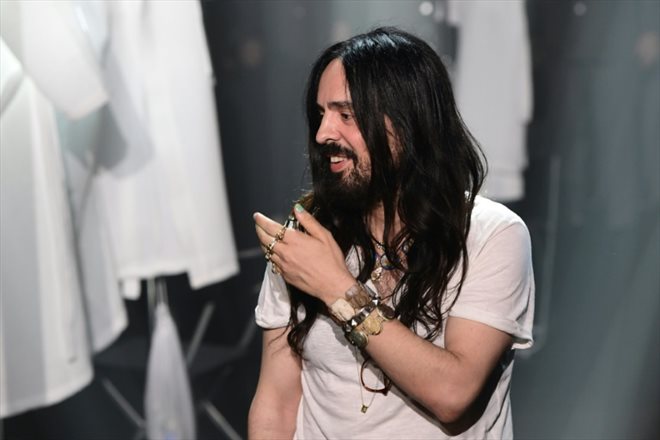 During the Spring-Summer 2023 show in Milan, Alessandro Michele was still amazed when, at the end of the presentation of 68 models, a wall had risen in the center of the catwalk revealing that another audience had watched the same spectacle of the other side… on identical twins. Or by displaying anti-extreme right slogans on certain outfits in a fashion show which took place on the eve of the election of Giorgia Meloni’s party in Italy.

After experiencing a jump in sales between 2015 and 2019, Gucci has stalled compared to competitors, slowed down in particular by the Covid and its heavy dependence on the Asian market (44%).

“Observers consider that after a thunderous start and fairly rapid growth, we are reaching a leveling effect which can create a feeling of impatience with the need for a new impetus”, analyzes Serge Carreira, emphasizing that Gucci, “it’s one of the three, four biggest brands in the luxury industry”.

Wednesday morning, after the site specializing in the world of luxury Women’s Wear Daily announced the departure of Alessandro Michele, citing anonymous sources, financial analysts did not hide their satisfaction.

“Very good news”, underlined a note from Bernstein: “Gucci suffers from brand fatigue and Alessandro Michele has been doing the same for seven years”.

“After seven years at the creative helm of Gucci, it may well be time for a change as institutional investors seem to agree that a new approach is needed to revive the brand,” according to a bank note. RBC.

Questioned by analysts during the presentation of the results of the third quarter, the financial director of Kering, Jean-Marc Duplaix, had defended himself in October.

“You know that in luxury what you have to consider is the long term (…) In recent years, the growth of the Gucci brand has been very consistent with that of our main competitors, whatever the outperformance of these competitors over the last two, three years,” he said.

In 2021, Gucci achieved a turnover increase of 31.2% compared to 2020. Over the same financial year, sales of Prada increased by 41%, those of Chanel by 49.6%. LVMH does not communicate on its brands but sales of its fashion and leather goods section (largely dominated by Louis Vuitton) increased by 47%.

“For analysts, there was a disconnect between Gucci and its main competitors”, underlines Serge Carreira, before qualifying: certainly, “its growth is weaker than that of its competitors but it is not a drop in turnover. The brand is not in crisis”.