Stranger Things Season 4: who could die in the finale?

Cyberpunk 2077: QA team work documents show one of the reasons for the game’s state at launch

Laeticia Hallyday, she adopts the trendy wavy square of the summer

When will the bottom be reached? A combine harvester in a soybean field in Lobos, about 100 km west of Buenos Aires, on April 29, 2022 (AFP/Archives/Juan MABROMATA)

Thanks to a conflict paralyzing two large cereal producers and a rise in the prices of agricultural raw materials, Argentina – champion of soybeans and corn – begins to dream of redeeming “agrodollars” for a sick economy. .

In Lobos, 100 km from Buenos Aires, in the scorched fields as far as the eye can see, the harvesters swallow the dried pods of soybeans, from dawn to dusk, without a break and in a cloud of dust. Take advantage of the dry days before the mid-autumn rains, and of market conditions.

South America’s 3rd economy is the world’s largest exporter of soybeans in the form of flour and oil, and the 3rd of seeds behind the United States and Brazil. Soy represents more than 30% of exports and contributed in 2021 to $9 billion in export tax revenue.

With the aftermath of the war in Ukraine on the oil and grain markets, “the outlook for producers is good, international prices too. There is enthusiasm”, agrees Martin Semino, agricultural machinery entrepreneur and president of the Rural Society (1st agricultural organization) of Lobos, a fertile region southwest of Buenos Aires.

Argentinian soybean production is expected to reach 41 million tonnes for the 2021-22 campaign, 10% less than last year due to drought. But with prices helping, the soybean sector should bring in a record 23.7 billion dollars, 700 million more than in 2021, according to analysts at the Rosario Grain Exchange, a market benchmark. 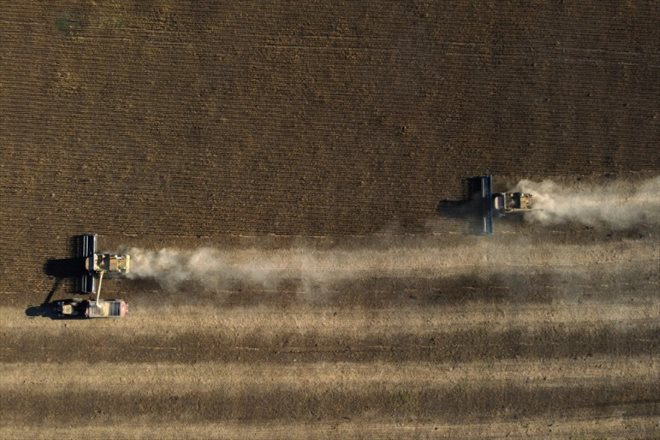 Combine harvesters in a soybean field in Lobos, about 100 km west of Buenos Aires, on April 29, 2022 (AFP/Archives/Juan MABROMATA)

Soy is cult in Argentina. The “soya boom” in the 2000s is considered to have greatly contributed to lifting the country out of its most serious economic crisis, in 2001. Its surface area has multiplied by 14 in 40 years, a surge of monoculture not without collateral damage from deforestation, impact on soils and countryside. But with dollars, oxygen for a structurally indebted country.

Ukraine and Russia being by far the largest exporters of sunflower oil, an opportunity is also opening up for Argentina — around the 4th-5th largest exporter in the world. After a record production of 3.4 million tonnes in 2021-2022, the cultivated area should increase by 17% next year, to 2 million hectares.

“With prices close to historical records, Argentina, which always needs dollars, must make the most of the moment”, analyzes for AFP Tomas Rodriguez Zurro, analyst at the Rosario Stock Exchange. The rise in prices “is temporary, it will end when the war is over”.

But cereal prices are not the only ones to panic, tempering the outlook for the sector. Fertilizers, fertilizers, fuel for machines, “the cost of supplies exploded with the war”, groans Martin Semino. “But a harvester requires between 600 and 1,000 liters per day” of fuel.

Recently, the Chambers of the Oilseed Industry (Ciara), and Cereal Exporters (CEC) warned the government, stating that “the rise in production costs, added to the shortage of essential inputs, has neutralized or even worse, the relative profits recorded by agricultural products”. 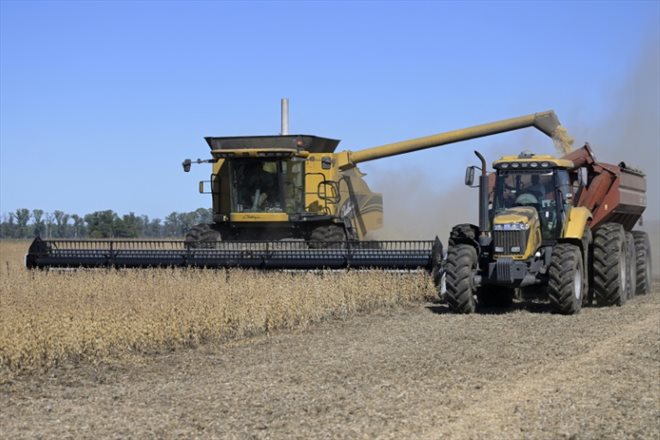 ‘Angry tractors’ marched two weeks ago in Buenos Aires, a demonstration that was not unanimous in the agricultural world and had a strong political content with the leaders of the center-right opposition in First line.

The object of anger? Tax pressure in general, and in particular the announcement by the government (centre-left) of an upcoming levy on the “unexpected profits” drawn from the war in Ukraine by certain sectors, such as the food industry. It would be used to feed a fund aimed at cushioning the shock of inflation (+16.1% in the 1st quarter of 2022) for the most vulnerable, while Argentina has 37% of the poor.

Because the government has clearly identified a “Ukrainian boon” for large producers and traders: only those who have made more than a billion pesos (8.5 million dollars) in net profit in 2021-2022 will be punctured. .

The government has also set up moving quotas for the export of corn (the country is the world’s second largest exporter) and wheat, and a “wheat stabilization fund”, to guarantee wheat — and therefore bread — affordable on the domestic market, regardless of the panic of prices.

Because this is not the least of the paradoxes of present-day Argentina: ensuring that the Ukraine effect, a windfall synonymous with agrodollars, does not turn into a social shock wave for a country that hardly needs that. .