“It’s for you, Camille”, Mbappé dedicates his goal to a sick girl insulted on social networks

Samsung unveils the Exynos 2200, its new SoC tailored for gaming

There is therefore an unofficial market for iPhones tinkered with USB-C, and the latest is waterproof

The longevity of the Hubble telescope depends on the Sun

Xiaomi Mi 11i: a promo code lowers the price of the 5G smartphone for the sales

iPad 2022: Apple would bet on 5G for change in continuity

In French poultry farms, avian flu is on the rise. In just 24 hours, 21 new cases of contamination were recorded. This Thursday, January 13, there are 151 infected farms, two thirds of them in the Landes.

The department is particularly affected because of “the concentration of farms” on its territory, explains the Ministry of Agriculture. In detail, 94 infected farms are in the Landes, 28 in the Pyrénées-Atlantiques, 16 in the Gers, eight in the North, two in the Vendée, two others in the Hautes-Pyrénées and the last in the Lot-et- Garonne.

At the same time, 21 cases were detected in wildlife and five backyards were affected. However, the figures remain lower than those recorded last year on the same date, with “three times fewer farms affected”.

In 2021, the crisis was stemmed at the cost of the slaughter, often preventive, of more than 3.5 million poultry, the vast majority in the South West. The balance sheet as of January 13 is not yet known, but around 650,000 poultry have already been slaughtered because of avian flu last December.

This new crisis, the fourth in six years, began on November 26, when the virus was first identified on a farm in the town of Warhem (Nord), with 160,000 laying hens raised in buildings.

In the aftermath, H5N1 reached the South-West with an outbreak detected on December 16, in a duck farm in Gers. Knowing that animals on infected farms are systematically slaughtered, health authorities have asked free-range and organic producers to confine their poultry in early November.

The stated objective is in particular to avoid any contact with migratory birds, potentially carriers of the virus, but this measure arouses the anger of the agricultural unions. They oppose the obligation of confinement, arguing that the first cases were all detected in conventional farms, in buildings.

“Claustration, the government’s flagship measure” has “failed to avoid a fourth crisis in six years”, accuses the Confédération paysanne and the Modef. These organizations believe that the “only possible way to stop this infernal cycle” is to “lower the extreme densities of certain territories in poultry”.

They also call for “putting an end to the segmented operation of the poultry sectors”, which involves different places of laying, breeding, force-feeding and slaughter. “By transporting live animals, products or sustained flows of stakeholders”, this organization “disseminates viruses”, assure the unions. 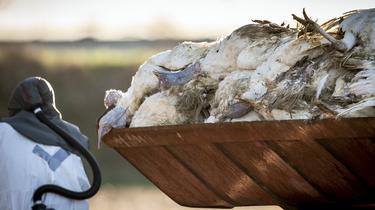 During this period of migration of birds from the Baltic to the temperate zones of the south, 29 countries other than France are affected by avian flu. According to the latest report from the Ministry of Agriculture, nearly 400 outbreaks in livestock and 700 cases in wildlife have been recorded across the entire European continent.