A concrete giant that can lift the weight of “50 whales”, the new boat lift in Niederfinow, eastern Germany, entered into service on Wednesday with the mission of giving impetus to river transport, on a canal between a Polish port and Berlin.

The inauguration of the 133-metre-long, 46-metre-wide and 55-metre-high concrete building gave rise to a competition of superlatives, ranging from “work of the century” for local authorities to “head of work of civil engineering construction” for German Transport Minister Volker Wissing.

Enough to forget the eight-year delay in the works and the doubling of the costs for this work impatiently awaited by the professionals of freight by inland waterway.

The lift, located about fifty kilometers from Berlin, allows boats to cross in a few minutes a drop in water of 36 meters on the Oder-Havel canal, a section of the connection between the Polish port of Stettin (Szczecin), on the Baltic, and the German capital.

The vision of the building is striking: the high concrete structure, crossed by cables connected to heavy counterweights, stands in the middle of the fields of the Brandenburg region. 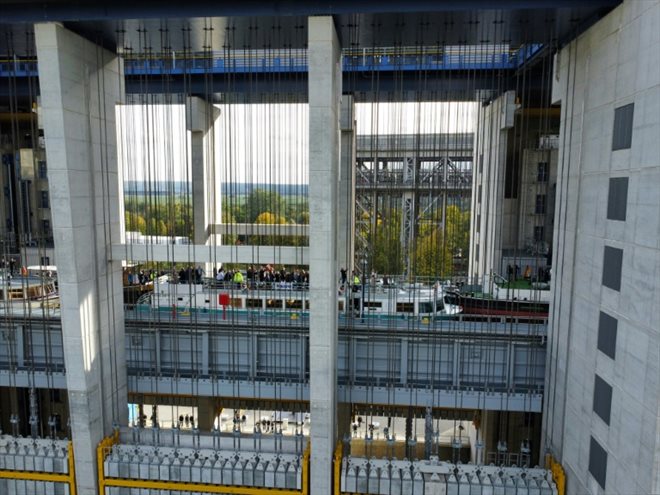 The boat lift in Niederfinow, Germany, on October 4, 2022 (AFP/Odd ANDERSEN)

Alongside it, the steel frame of the old lift is just as imposing: commissioned in 1934, it is still operational but its capacity had become insufficient for the current standards of maritime and river traffic.

In the new work, the boats have more space in the ferry which makes them go up and down. Its length exceeds its predecessor by 30 meters and it can carry almost 10,000 tons, twice as much as its old one.

This corresponds “approximately to the weight of 50 adult blue whales or 1,600 elephants”, assured Volker Wissing during the inauguration on Tuesday.

These dimensions will allow the passage of modern barges, making “a very important contribution” to the development of river transport, considered essential to achieve climate neutrality by 2045 in Germany.

Boats provided only 7% of freight and goods transport in 2021, according to official statistics, compared to almost 73% for heavy goods vehicles. 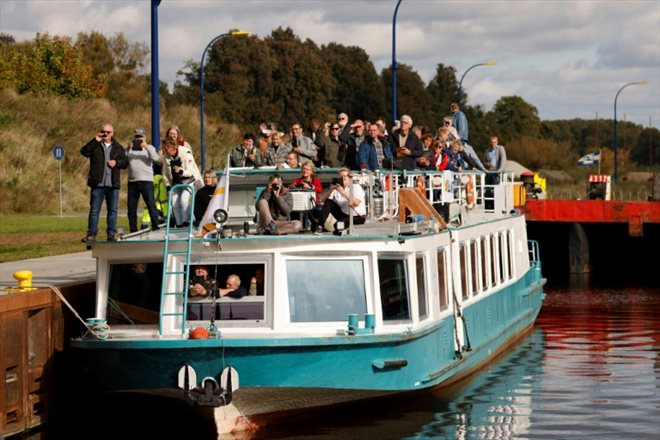 Spectators attend the inauguration of the boat lift in Niederfinow, Germany, on October 4, 2022 (AFP/Odd ANDERSEN)

The construction site experienced many hazards, a bit like that of the major Berlin International Airport (BER), another major problem structure in the Brandenburg region which had made headlines in recent years.

The elevator has even inherited the nickname “BER of the boats” in the local media.

Its construction suffered in particular from delivery delays, the bankruptcy of one of its suppliers, a lack of manpower, before the coronavirus pandemic paralyzed the work.

The old elevator will still continue its activity, in slow motion, until 2025. If at the time of its inauguration, it was the highest in the world, this record has long since fallen. It is currently held by the work near the Three Gorges Dam in China, which raises and lowers boats to a height of 113 meters.

But it will be kept as a tourist attraction, a welcome function it has already provided for decades for Niederfinow, a village surrounded by fields of just over 600 inhabitants.