Investing.com – The has already suffered recent higher than expected highs, and it has yet to recover from this setback. Quite the contrary, with the approach of Wednesday, the was again under pressure.

The market priced in another 0.75% key rate hike, but a 1.0% hike cannot be ruled out either. This last hypothesis has not been observed for 40 years and would hit the market hard. Against this backdrop, even riskier investments like cryptocurrencies are reacting negatively to the upcoming event.

“The Fed is not going to easing for the foreseeable future. Falling prices are a typically human reaction, as we now have the benefit of knowing how many mistakes the Fed made while it was easing too much. its monetary policy.

At Goldmann Sachs, policy rates were so far expected to be raised by 0.5 percent and 0.25 percent in September and November. This forecast has since been changed under the leadership of Jan Hatzius, so that rate hikes of 0.75% and 0.5% are now expected.

This of course affects traders’ expectations. Year-end expiring bitcoin options reveal most traders are betting on a decline of BTC in the range of 10,000 to 12,000 dollars.

This scenario matches the estimate of Goldman Sachs (NYSE:) analyst Sharon Bell. She is convinced that the stock markets should fall another 26% if the Fed is more aggressive in its fight against inflation.

Technical thresholds to watch on the Bitcoin price

The support at the 78.6% Fibo retracement at $19,251 has been breached, paving the way for a test of the cycle low at $17,630. The RSI is not yet in the oversold zone, which makes it possible to immediately extend the negative momentum. 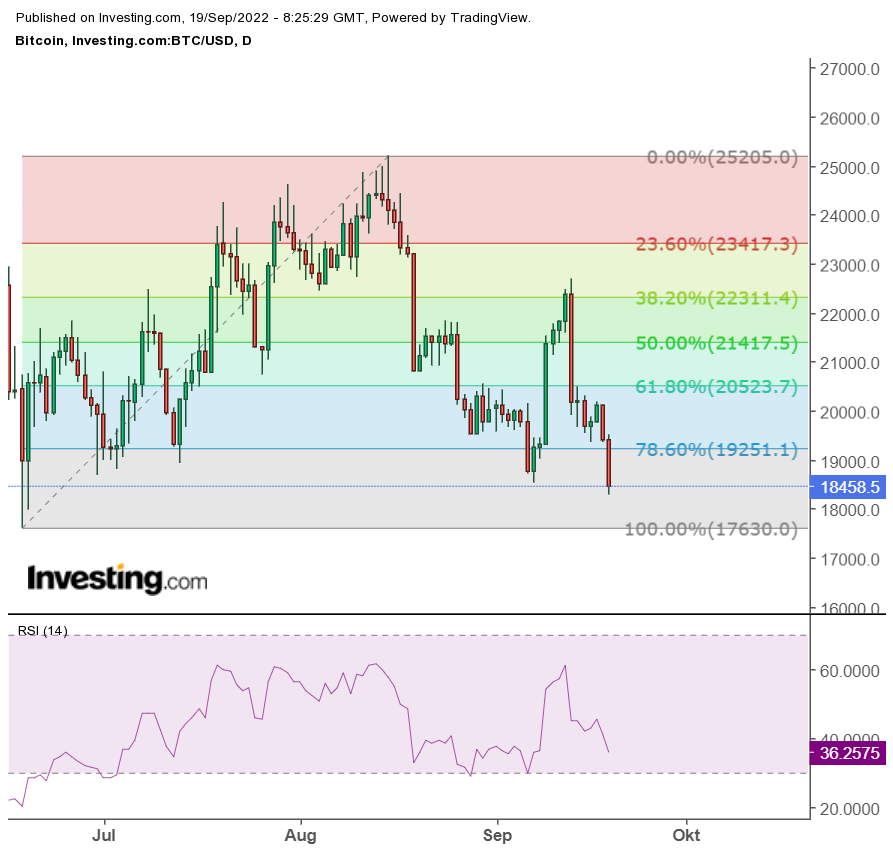 Only if the bulls manage to sustainably overcome the resistance of the 78.6% Fibo retracement can short-term losses be avoided. Above this level, attention would then shift to the psychological mark of $20,000 and the 61.8 percent Fibo retracement of $20,523.