Play first person shooter for free: Thanks to these titles, you can get tons of action without paying any money

Need a second Xbox Series controller? Until tonight, the Microsoft accessory is exactly 39.99 euros on the Rakuten site, on behalf of Black Friday. To have it at this excellent price, you will have to enter a promotional code.

After Google’s Chromecast 4K, it’s the turn of the xbox series controller to be the victim of a super good plan at Rakuten.

On the eve of the official Black Friday 2022 kickoff, the Xbox Series Console Wireless Controller is being sold in a Charcoal Black colorway for €39.99 instead of 49.99 euros. The reduction of 10 euros is made with the coupon WARMUP10valid until tonight, which must be entered manually during the order stage.

For information, it is the official Boulanger store that sells the product and ClubR Rakuten members will have a voucher of 4.50 euros to pay during a next order placed on the Rakuten site. Taking this cashback into account, the controller returns to the unbeatable price of 35.49 euros.

As a reminder, the Xbox Series X and Xbox Series S compatible Microsoft controller is equipped with Bluetooth wireless technology and a 3.5mm headphone jack. The controller also features a D-pad for precise grip, a non-slip surface on the triggers and back of the controller, and a dedicated share button. It is possible to play and quickly switch between devices, including Xbox Series X and S consoles, Xbox One, PCs running Windows 10 and devices running Android system. 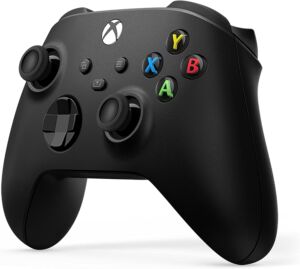