This October 28 marks the return of the Call of Duty license, with Modern Warfare 2. Multiplayer will finally be available, after the campaign received a week of early access.

Activision has already given plenty of information about the content upon release, including the different Operators that can be played, some not being so for all. This is why we offer you a return on Operators available when Call of Duty: Modern Warfare 2 is released.

On the side of the SpecGru faction, we will find twelve Operators, including some well-known names, such as Ghost, Price and Soap, to name a few. The full list:

Jesus “Chuy” Ordaz: Mexican soldier engaged in the Cuerpo de Fuerzas Especiales, on the recommendation of Alejandro Vargas. Using the knowledge he gained while serving in the Mexican Special Forces, he currently trains locals to defend themselves against cartel corruption, even if they are outnumbered and outgunned.

Kleopatros “Kleo” Gavras: female special forces officer of the Zeta Amphibious Squadron (Z’MAK), part of the Greek Armed Forces. Specializing in stealth combat and known for her “green eyes of Hades”, the last thing her enemies see before they die.

Tse “Luna” Míngzhu: a West Point graduate, from a Singaporean immigrant family, serving in the land branch of the CIA’s Special Activity Center (SAC) after being denied a promotion. Played a vital role in tracking down the Al Qatala cell responsible for the London terrorist attacks during the Modern Warfare (2019).

Nila “Nova” Brown: leader of the British L Company of 42 Commando, within the Royal Marines, specializing in the rescue of downed airmen. Third generation pilot in her family, her nickname was given to her after her mission in the Royal Air Force, where she sacrificed her plane to destroy another, creating a “supernova” effect.

Enzo “Reyes”: former member of the Canadian Special Operations Regiment (RCOS) with an encyclopedic knowledge of military history and small team tactics. After lying about his age and forging signatures to get selected, he clashed with instructors before serving several times in Al-Mazrah and Urzikstan regions, before leaving in 2020 to join “clandestine forces » multinationals.

Simon “Ghost” Riley (Red Team 141) : lieutenant within Task Force 141, serving on short deployments for secret missions in classified places. A top-secret past. A man of few words. A legendary soldier who needs no introduction.

John “Price” (Red Team 141) : former member of the 22nd Special Air Service Regiment, known by the call sign “Bravo Six”. Currently leads the Task Force 141 Operations Squadron, with the assistance of CIA Station Chief Kate Laswell and under the supervision of General Shepherd, as part of the Five Eyes Alliance. 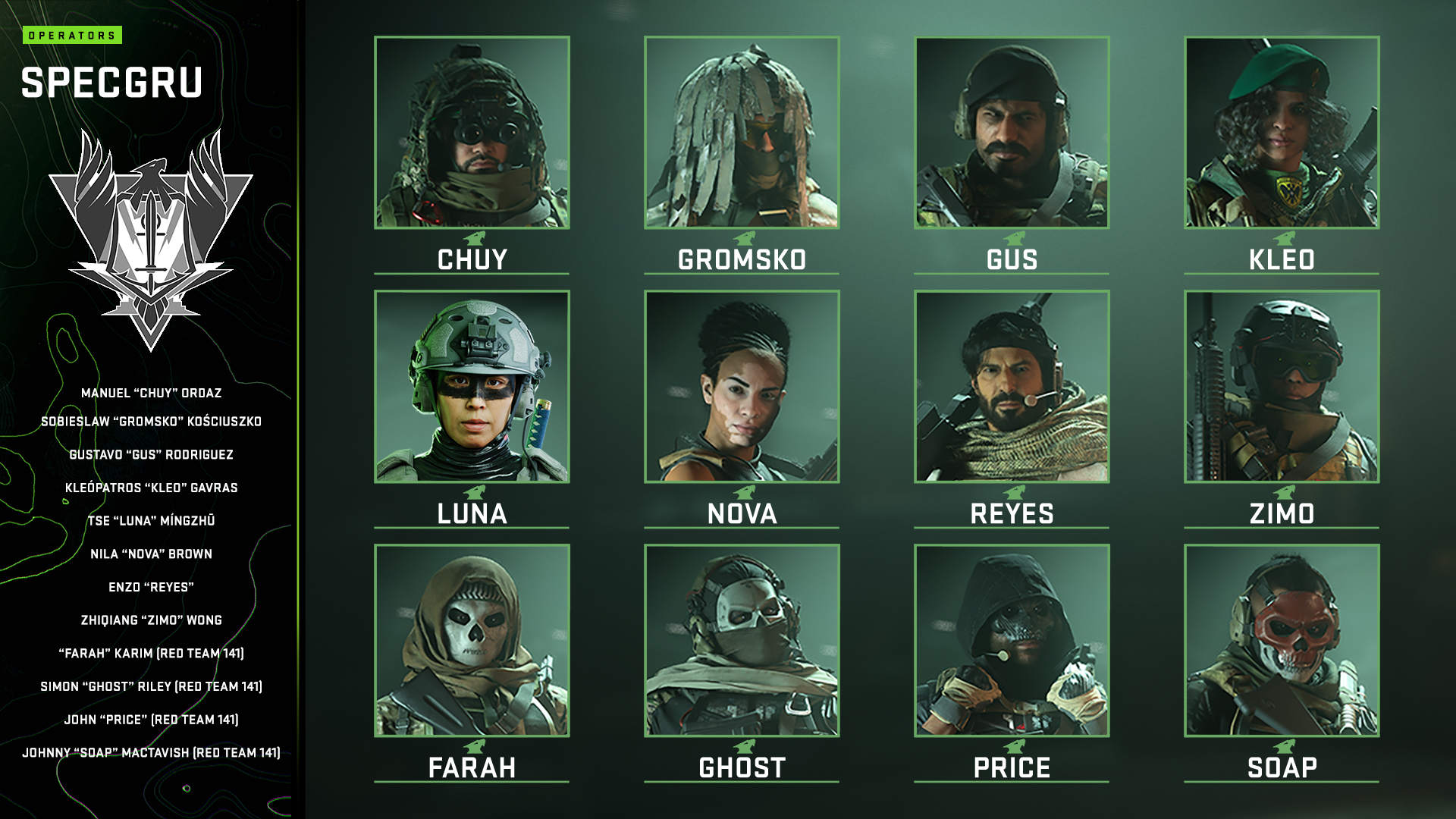 As for KorTac, and its eleven Operators, we find the following:

Tor “Aksel” Eriksen: versatile specialist of the Norwegian Marinejegerkommandoen. Considered a modern-day Viking, he has a full range of skills, from high-altitude parachute jumping, to mine clearance and even hostage rescue.

Calisto Allard: Franco-Spanish descendant of the last royal family of France who rebelled to join the Chasseurs Alpins of the 27th Mountain Infantry Brigade. A high-altitude combat expert known for her incredible precision, with her weapon of choice: the bow.

Fender Takacs: Hungarian Zászlós (warrant officer) of the country’s defense forces, specializing in high-value targets, demolitions and urban combat. Raised without knowing the identity of his father, a “great” CIA operator, he was told to always hide his face, which he does with a custom helmet.

Darnell “Hutch” Hutchinson: American college football athlete turned Navy network and data specialist. With the help of the Call of Duty Endowment, he found a job in the private cybersecurity industry after four years of active duty, but eventually returned when he learned of the Forces Cyberspace Command. of the Marine Corps (MARFORCYBER).

“Konig”: Austrian Jagdkommando within his country’s Special Forces, known only to be a giant with a sniper balaclava covering his face.

Rozlin “Roze” Helms: US Army ranger, formerly hired by the Jackals to eliminate Al Qatala in Africa, and by the Shadow Company to restore order in Verdansk. Highly sought after for her skills in small unit tactics and close combat, she ditched her contract with the rowdy company and her dark suits in early 2022 to align with SpecGru.

Salvatore “Stiletto” Muselli : Italian police officer in the Carabinieri Anti-Mafia and Anti-Drug Task Force, famous for his characteristic switchblade knife. A fearless urban warfare specialist who used her experience against the Camorra to train police forces against other crime syndicates and terrorist cells, including those in Las Almas.

Sami “Zero” Zakaria : operator of the Egyptian Task Force 777, part of the counter-terrorism unit within the country’s first El-Sa’ka Forces. His nickname comes from his journey to service: overwhelmed with grief after surviving a nightclub attack that left him losing his sisters, he sacrificed his opulent and privileged life for a selfless position in protection others.

Hiro “Oni” Watanabe (PlayStation Exclusive) : Japanese scion of a centuries-old samurai clan, he left home as a teenager not to join a crime syndicate as his father wanted. After serving overseas, he joined the His country’s Special Combat Team, but was fired from the military for dishonor, thanks to the influence and power of his father, now head of that same union. Currently, Oni is a mercenary who takes a vow of justice according to the ancient samurai code.

Only available for PlayStation players. 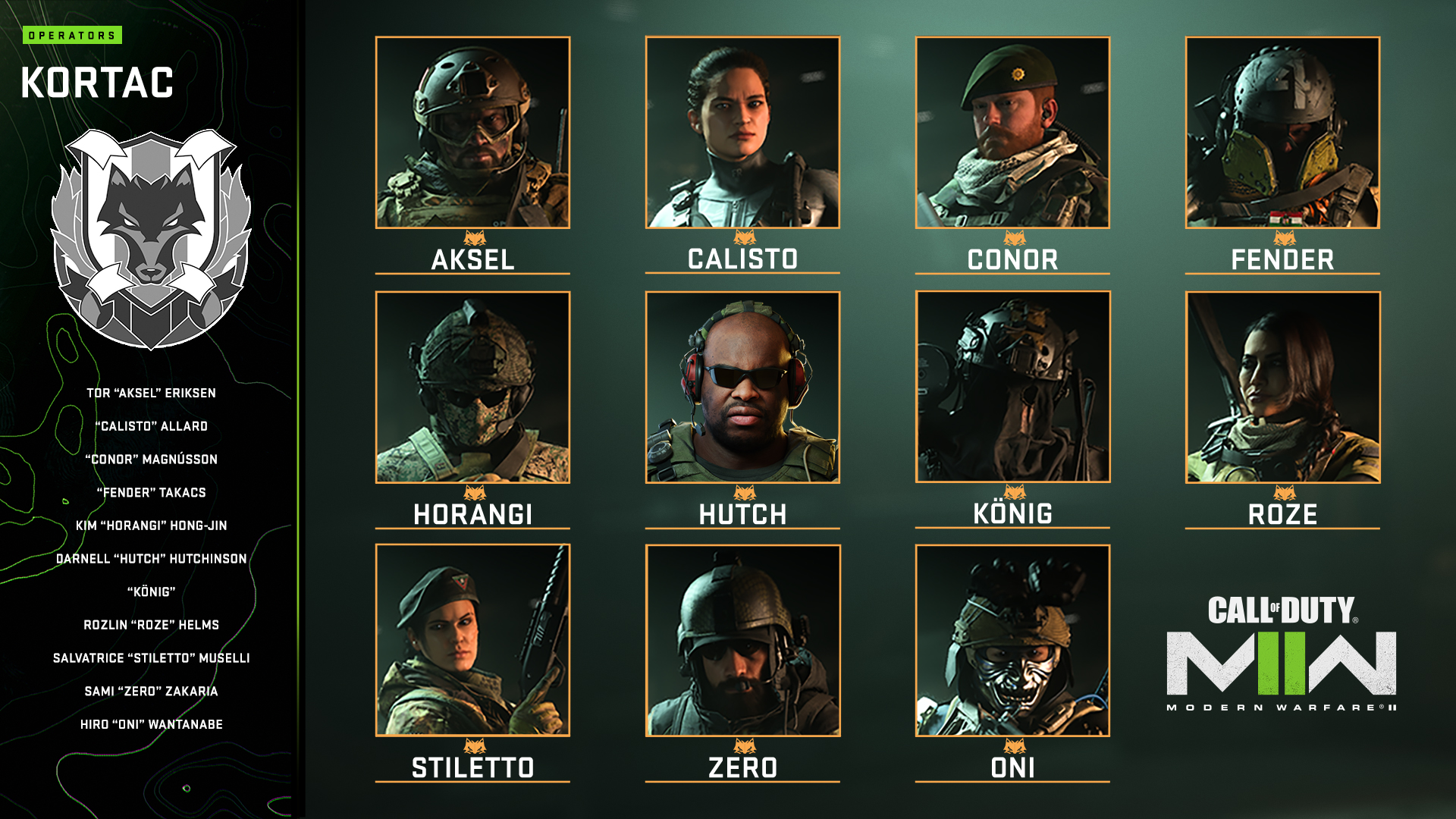 Naturally, and as always, other Operators will be added along the wayduring the first content updates, as for Season 1.