France: The State has submitted an offer for EDF at 12 euros per share – AMF

Google unveils its new features for the end of 2022: redesign of the Google Home app and Nest WiFi Pro

The Mexican Navy’s firefighting vessel and helicopters struggle to contain the fire at the oil depot in Matanzas, Cuba, on August 10, 2022 (AFP/Yamil LAGE)

The gigantic fire which broke out on Friday in an oil depot east of Havana and which, according to a provisional report, left one dead and 14 missing, is “under control”, the firefighters announced on Wednesday.

“We can say that the fire is under control,” Cuba’s deputy fire chief, Alexander Avalos Jorge, told reporters, acknowledging the assistance provided by Mexico and Venezuela.

The disaster began Friday evening when lightning struck a first tank in the oil complex located in the suburbs of Matanzas, a city of 140,000 inhabitants 100 km east of Havana. The fire then spread to three other tanks that could contain up to 52 million liters of diesel or crude oil.

“We are more serene”, rejoiced Mr. Avalos, specifying the total extinction of the flames fed by the enormous quantities of oil “is not for today”.

A Cuban pilot who flew over the area early Wednesday told national television that one of the tanks “is practically extinct” and that “today we are going to put the finishing touches on it.”

According to images shot by this Mexican Navy helicopter, the fire from a second tank spits less smoke and flames than in previous days.

A smoke still as dense and black, making visibility difficult, escapes however from two other tanks but the columns of flames rising in the sky also seemed less high. 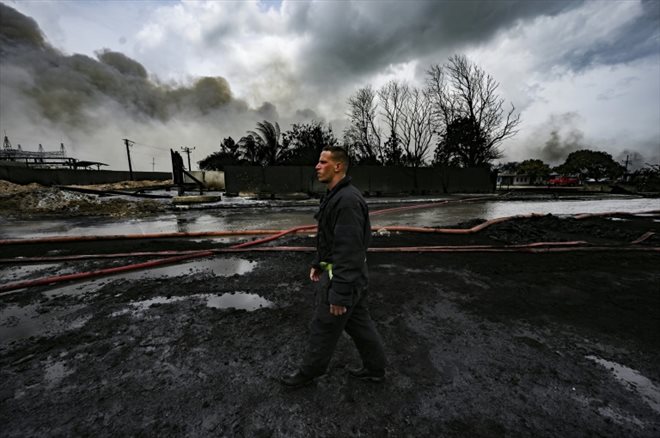 A firefighter at the Matanzas oil depot on August 10, 2022 in Cuba, where a gigantic fire broke out (AFP / YAMIL LAGE)

“The work was effective,” added the Cuban pilot, referring to efforts to contain the fire from a distance from the group of four other mega-tanks in the depot, located 150 meters from the blaze.

A Mexican Navy firefighting vessel sprays water 150 meters away and five helicopters carry out incessant drops. In the distance, the plume of smoke rising in the sky seems clearer, noted AFP journalists.

One firefighter was killed and 14 are missing, according to a provisional report. Twenty people are still hospitalized out of the 128 injured. 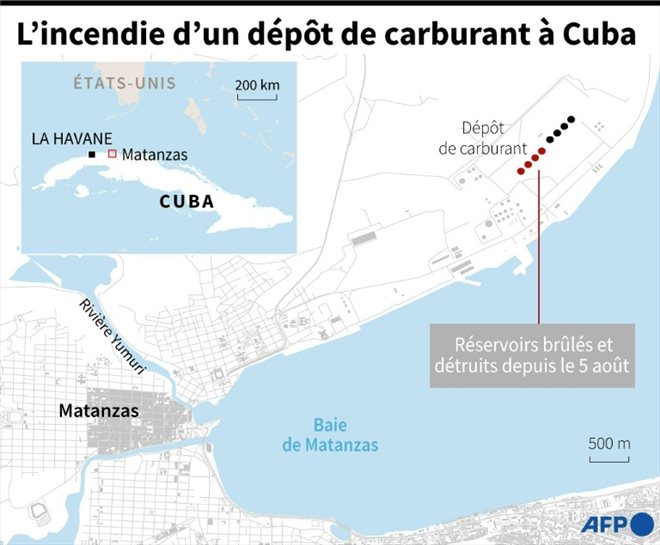 The burning of a fuel depot in Cuba (AFP/Gustavo IZUS)

On Tuesday, President Miguel Diaz-Canel told the press that with the progress made “we will be able to go and recover the victims”, most of whom died on Saturday at dawn when an explosion blew the first tank in fire.

“It will be a very difficult time” for which “we must be prepared and support these families,” he added.

Some 17 planes in total, 13 from Mexico and four from Venezuela, carrying oil firefighting specialists and firefighting foam landed at the resort town of Varadero, 40 kilometers northeast of Matanzas. 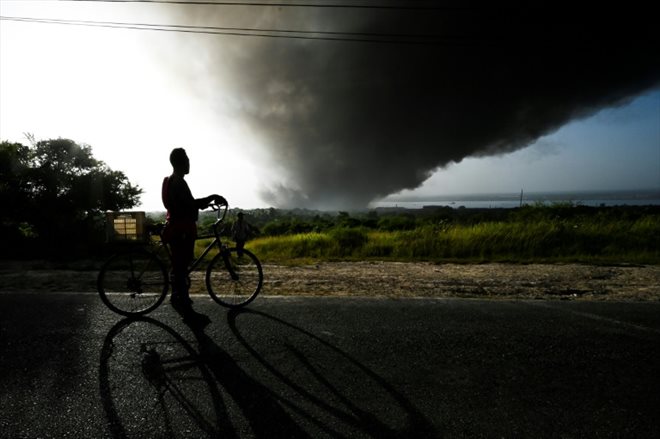 The thick column of smoke rising in the sky over Cuba after the fire at the oil depot in Matanzas, Cuba, on August 9, 2022 (AFP/YAMIL LAGE)

Washington, after expressing its condolences on Saturday, “offered its technical assistance, which we also appreciated and accepted. The two governments are in regular contact. No need to speculate,” tweeted Cuban Vice Foreign Minister Carlos Fernandez de Cossio, in reference to messages that appeared on social networks complaining that Havana is not accepting American aid.

This fire at Cuba’s largest crude oil storage center, strategic for supplying the country’s thermoelectric power plants, will have consequences for the island’s electricity supply.

The nearby Antonio Guiteras thermoelectric plant, supplied with fuel by a pipeline from this oil depot, was returned to service on Wednesday after two days of shutdown, limiting power cuts throughout the country which was already facing to a severe shortage of production.