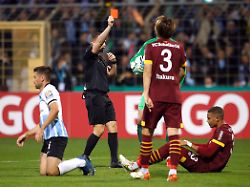 The second round of the DFB Cup starts with a surprise. FC Schalke first fell behind in third division 1860 Munich and then outnumbered. Hertha BSC, on the other hand, benefits from a dismissal, while Holstein Kiel sets a negative record from 1977.

Second division soccer club Schalke 04 have suffered a setback after their soaring in the league. Dimitrios Grammozis’s team lost 1-0 (0-1) after four wins in a row in the second round of the DFB Cup at the third division club 1860 Munich and missed the second round for the first time in six years. Stefan Lex (5th) shot the two-time cup winner back into the round of 16 for the first time since the 2016/17 season. The five-time cup winner Schalke played after the red card against Malick Thiaw (48th, emergency brake) for almost the entire second half .

The outsider started furiously. Sascha Mölders won the ball against Darko Churlinov and hung up for Lex, who took the lead through the legs of goalkeeper Ralf Fährmann. Two minutes later Fährmann prevented another goal against Merveille Biankadi. The guests had a hard time without their goal scorer Simon Terodde, who was initially sitting on the bench. When Lex hit the bar (22nd), the Royal Blues were lucky. The guests slowly worked their way into the encounter. Thomas Ouwejan (30th) narrowly missed the equalizer, then Löwen goalkeeper Marco Hiller parried a Marcin Kaminski header (31st).

The second half began with a setback for Schalke. Thiaw fouled Lex just outside the box and saw the red card. Fährmann steered the subsequent free kick by Daniel Wein to the corner. Terodde came in the 62nd minute – but the turnaround did not materialize.

RB Leipzig reached the round of 16 with a laborious win. The Bundesliga runner-up won his second-round duel with 1-0 (1-0) without a glimpse at the fiercely fighting regional league club SV Babelsberg 03. Dominik Szoboszlai (45th) brought the huge favorite into the round of 16 (January 18 and 19, 2022) with his golden goal. A successful cup season ended for the fourth-class Babelsberger, in the first round the team around ex-Leipzig Daniel Frahn had eliminated first division promoted SpVgg Greuther Fürth on penalties.

The RB team quickly flashed their offensive potential in front of 6,218 spectators in the sold-out Karl Liebknecht Stadium. The rushing Benjamin Henrichs (9th) shot quite freely after a free-kick cross from Szoboszlai. Seven minutes later, the moment of shock for Leipzig: Josep Martinez, who represented captain Peter Gulacsi in goal, had misjudged when running out and was overspeed by Robin Müller. However, this did not bring about a good cross. Leipzig now became a bit more compelling, but often remained too imprecise. And they missed their big chances for a long time in the first round. Henrichs found Poulsen (20th) in the penalty area, whose shot was saved by Babelsberg goalkeeper Jannick Theißen, but the ball could only be cleared in front of the line by defender Marcus Hoffmann.

And Theißen was asked again immediately. When Leipzig’s only 18-year-old debutant Hugo Novoa (29th) ran towards him from the left, the goalkeeper saved the hosts from falling behind. Szoboszlai did better just before half-time when the 21-year-old Hungarian was played by Poulsen on the edge of the box and Theißen tunnelled at the end.

After the break, RB wanted to quickly clear things up and put Babelsberg under even more stress. Szoboszlai (49th) should have scored his second goal after Poulsen’s template, but failed from close range to Theißen. The agile Henrichs just barely forgot ten minutes later. Leipzig now managed the game against hosts who were still lurking on the counterattack. Müller (71) almost used one of these to equalize, his shot only went to the side netting.

After a show of strength, Bundesliga soccer team Hertha BSC is in the round of 16. The Berlin team won 3: 1 (1: 1) against the regional league team Preußen Münster, making it into the top 16 teams for the third time in the past four years. In front of 11,037 spectators in the sold out Prussian stadium, Stevan Jovetic (3rd), Ishak Belfodil (79th) and Marco Richter (83rd) met for the guests. Thorben-Johannes Deters (41st) achieved the interim compensation. The outsider played after yellow-red against Nicolai Remberg (45th + 1, unsportsmanlike behavior) for one half in a minority, Hertha took advantage of the advantage late.

After the happy progress through the breakdown of Bundesliga club VfL Wolfsburg, the Prussians approached the game humbly, on the field the regional league team took a cold shower after a little more than two minutes. Davie Selke, who had saved his team from extra time in the first round in Meppen with his late winning goal, crossed to Dennis Jastrzembski. Jovetic, one of eight newcomers to the team against the 1-0 win against Borussia Mönchengladbach, took the lead.

After a quarter of an hour, Münster became a little bolder. At the end of Deters, Berlin keeper Alexander Schwolow had to intervene for the first time (16.). On the other side, keeper Maximilian Schulze-Niehues prevented Jovetics’ second goal (21st). Unfocused actions by the regional league team punished the Berliners with dangerous counterattacks, but overall the favorite disappointed. With the last action before the break, the outsider himself put a brake on euphoria. The already warned Remberg fell theatrically to the ground in the Hertha penalty area and consequently saw yellow-red (45th + 1).

In excess, the Berliners continued to struggle. Instead of hiding, Münster put the first needle pricks. Substitute Suat Serdar missed the first noteworthy opportunity for Berliners in half-time two (65th), Deyovaisio Zeefuik failed to Schulze-Niehues (70th). Then the Jokers met Belfodil and Richter.

The storks lay their own eggs in their own nest: the troubled semi-finalist of the previous year, Holstein Kiel, initiated his own end with a strange double-goal. The North Germans, who fell to fourth from bottom of the table in the second division, lost 1: 5 (0: 2) to Bundesliga club TSG Hoffenheim in the second round. Kiel’s Johannes van den Bergh (3rd) and Hauke ​​Wahl (31st) each maneuvered the ball into their own goal. The last time there were two own goals in the DFB Cup was in 1977 in the game between TuS Rosenberg and MSV Duisburg (1:11).

In addition, Angelo Stiller (59th), Munas Dabbur (72nd) and Jacob Bruun Larsen (84th) met for the Kraichgauer, who hardly noticed any after-effects of the latest league swat at Bayern Munich (0: 4) on the way to the second round let. Those Bavarians sensationally threw the Kiel out of the competition in the 2nd round last year. Such surprises will not come of this time – despite the goal by Phil Neumann (47th). At the beginning of the second round, the Kraichgauer, who had to play against Hertha BSC in the league again on Friday, were still thinking about it. Neumann used that to catch up. From a distance, Bartels had the equalizer on the foot.

On the other hand, the Hoffenheim team then missed a lot of great opportunities. In contrast to the goalscorer Stiller, Sebastian Rudy, Dabbur and Andrej Kramaric left numerous top-class players unused. The Israeli Dabbur nevertheless made the decision.