(File photo) Interior view of the Inaquito market, in the north of Quito, partially closed due to an indigenous protest movement against the high cost of living, June 23, 2022 (AFP/Archives/Rodrigo BUENDIA)

Rising prices, shortages, deserted markets: in Ecuador, 14 days after the start of the demonstrations by the natives against the high cost of living, the consequences are beginning to be felt seriously on the economy as well as on the daily lives of the inhabitants.

Rotten peppers crumble in the hands of Mariana Morales. After a week without having been able to open her stall in the popular market of Santa Clara, in the north of Quito, this trader is in despair.

Where fruits and vegetables once overflowed, the Santa Clara market is now nothing more than empty trays and stalls covered with tarpaulins.

400 km away, in Guayaquil (southwest), the country’s second largest city and economic capital, Andean foodstuffs such as potatoes and corn are already in short supply.

“The situation is difficult because there is no one left to bring food from the highlands,” says Rosa, an indigenous woman who has been selling vegetables in a port market for 15 years.

Nearly 14,000 indigenous demonstrators are mobilized across the country to protest against the rising cost of living and demand in particular a drop in fuel prices, according to the police. 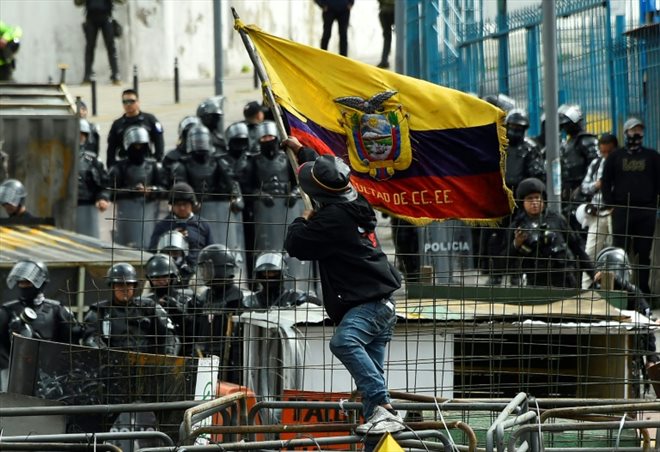 A demonstrator waves the Ecuadorian flag while police stand guard around the National Assembly on June 25, 2022 in Quito (AFP/Rodrigo BUENDIA)

If all eyes are focused on the capital, where their number would be close to 10,000, with daily clashes with the police for a week, numerous checkpoints and barricades block the main roads of the country, in particular the umbilical cord of the Panamerican.

Since the start of these roadblocks, the Terminal de Transferencias de Víveres (TTV), Guayaquil’s only wholesale market, has been out of stock.

Every day, this supply center normally receives nearly 3,000 truckloads of food from the Andean highlands, a figure that has dropped by nearly 70%.

In Quito, whose main access roads are intermittently blocked, the authorities are trying to get trucks under the protection of the army and the police. It was in the attack on one of these convoys on Thursday that 17 soldiers were injured.

(File photo) Interior view of the Inaquito market, in the north of Quito, partially closed due to an indigenous protest movement against the high cost of living, June 23, 2022 (AFP/Archives/Rodrigo BUENDIA)

Like five other markets in the capital, the Santa Clara market, due to its proximity to one of the hotspots of the demonstrations, had to close for four days and only partially resumed its activities on Saturday.

“The pepper was brand new and now it’s lost,” plagues Mrs. Morales, digging her fingers into her rotten vegetable. This 69-year-old woman did not go to the wholesale markets to stock up, due to the explosion in prices. “A bag of carrots that used to cost $25 is now worth $100,” laughs the shopkeeper.

Rising food prices are also affecting consumers, who are finding it difficult to afford products such as eggs, chicken and cooking gas.

Ms Morales says it gives her “bad conscience” to charge customers a dollar for just a stalk of onion.

“Everything is too expensive. Before, I was sold a kilo of tomatoes for 0.50 dollars, now it costs me a dollar,” explains Silvana Quimi, a housewife from Guayaquil, where food prices have doubled in one month. week.

A man disguised as the Joker, an American comic book character, demonstrates near the Ecuadorian National Assembly on June 25, 2022 in Quito (AFP / Rodrigo BUENDIA)

In the capital, the situation is similar. From one dollar, the bunch of bananas went to two dollars. “However, we are in a country that produces bananas. Today they no longer arrive (in town), and what is available costs an arm and a leg,” grumbles Agustin Pazmiño, a 56-year-old trader.

Conservative President Guillermo Lasso, “during the campaign, promised us paradise, but we live in hell”, he complains, deploring, like the demonstrators, the rise in fuel prices: + 90% in one year for the diesel, +46% for gasoline.

The government estimates it is losing $50 million a day due to the protests. He argues that the lower fuel prices demanded by the natives would cost the state more than a billion dollars a year in subsidies.