Fires in Gironde: “hell” is back

France: unemployment rate almost stable in the 2nd quarter at 7.4%, according to INSEE

World food prices fell sharply in July, driven down by cereal and vegetable oil prices, according to the FAO (AFP/Archives/Vincenzo PINTO)

World food prices fell sharply in July, driven down by cereal and vegetable oil prices, the Food and Agriculture Organization of the United Nations (FAO) said on Friday.

After a historic high reached in March following the invasion of Ukraine, the FAO food price index, which tracks the variation in international prices of a basket of basic products, has fallen by 8 .6% over one month, marking a fourth consecutive decline.

However, it remains at high levels, standing at 140.9 points in July, with an increase of 13.1% over one year compared to June 2021, underlines the agency.

Máximo Torero Cullen, FAO chief economist, hails a “welcome decline, especially from the point of view of access to food”, recalling however that many risks still weigh on global food security, such as a recession. or “high fertilizer prices and their potential impact on production and farmers’ livelihoods”.

The FAO vegetable oil price index fell by 19.2% in July, “thus falling to its lowest level for 10 months”, under the effect of a fall in the prices of all oils combined and in crude oil.

Abundant availability of palm oil for export in Indonesia and a good rapeseed harvest are pushing down these prices, to which is added a sluggish import demand for sunflower oil – including Ukraine is a major producer -, which shows a marked decline. 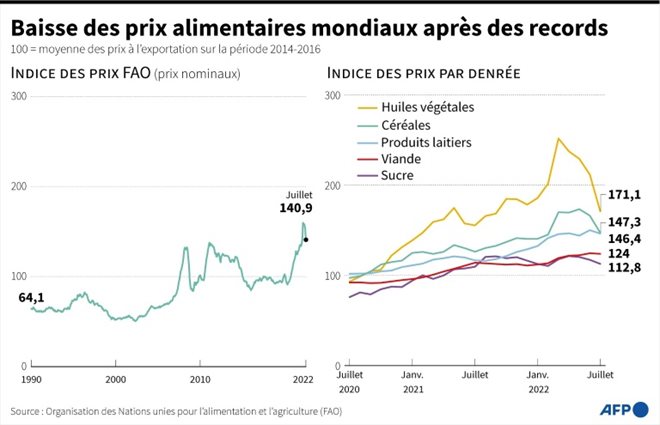 The FAO cereals index sank by 11.5%, “the biggest fall being due to world wheat prices, which lost no less than 14.5% in reaction to the agreement reached between Ukraine and the Russian Federation about the unblocking of the main ports of the Black Sea”, underlines the organization.

Since the signing of this long-awaited agreement on July 22, a first ship, the freighter Razoni, set sail on Monday from Odessa after five months of total inactivity in the ports. Three new shipments of grain also left Ukraine on Friday, said Turkey, which oversees the implementation of these exports.