Market: Europe continues a third session in the red

After Draghi has begun in Italy, the stock market and currencies under pressure Demonstration to denounce the suspension of local regulations intended to curb the expansion of tourist accommodation in the Basque Country, June 8, 2022 in Bayonne (AFP / GAIZKA IROZ)

Some 300 people demonstrated Wednesday evening in Bayonne to denounce the suspension by the administrative justice of a local regulation intended to curb the expansion of tourist accommodation in the Basque Country, where the difficulties in finding accommodation lead to tensions.

Gathered in front of the headquarters of the Basque Country Agglomeration Community at the call of the collective “Vivre et se loger au Pays!”, which brings together around thirty organizations from the associative, trade union, cultural and political world, the demonstrators distributed “Airbnb is evicting us” stickers to denounce “a decision that does not make sense”.

A delegation of demonstrators was then received by the elected officials to “think about a future settlement” in order to “counter-attack strongly”, according to the organizers.

On Friday, a regulation adopted by the Basque Country Agglomeration Community, which required owners of furnished tourist accommodation to produce, in compensation in the same city and with an equivalent area, a property on the year-round rental market, had been suspended. by the Administrative Court of Pau.

The Urban Community of the Basque Country (158 municipalities) estimates the number of vacant homes at 12,000 and the number of second homes at 42,000, for a territory of just over 300,000 inhabitants in demographic growth.

In 24 municipalities of the Basque agglomeration in a tight area, more than 16,000 tourist accommodations are currently listed, an increase of 130% between 2016 and 2020, according to the Atlantic and Pyrenees Urban Planning Agency (Audap). 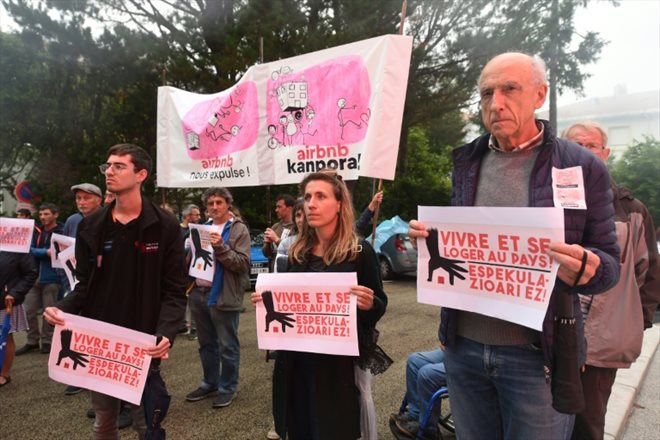 Demonstration to denounce the suspension of local regulations intended to curb the expansion of tourist accommodation in the Basque Country, June 8, 2022 in Bayonne (AFP / GAIZKA IROZ)

Inscriptions “The Basque Country is not for sale” in the Basque language have flourished since last year on the fronts of real estate agencies and houses for sale, reviving the memory of the years 2007/2008 when sabotage took place and laminations of real estate signs or second homes.

In November, a demonstration for the right to housing brought together between 6,500 and 8,000 people in the streets of Bayonne.