War in Ukraine, energy prices… What is the outcome of the G7 summit? Ukrainian President Volodymyr Zelensky appears on a giant screen during his speech by videoconference before the World Economic Forum in Davos (Switzerland), May 23, 2022 (AFP / Fabrice COFFRINI)

More weapons and “maximum” sanctions: three months after the invasion of his country by Russia, Ukrainian President Volodymyr Zelensky called on Monday in Davos for faster international aid.

“The sanctions (…) should be maximum, so that Russia and any other potential aggressor who wants to wage a brutal war against its neighbor clearly knows the immediate consequences of its actions”, he said during the day. opening of the annual meeting of the World Economic Forum (WEF) in Switzerland.

At a time when kyiv says it is facing an “increasingly difficult” situation in the Donbass (east), under intense Russian bombardment, Mr. Zelensky also called for more weapons for his country, regretting that the support of the international community is not fast enough.

“If we had received 100% of our needs in February, the result would have been tens of thousands of lives saved. This is why Ukraine needs all the weapons we ask for, not just the ones that have been supplied” , said the Ukrainian president, who spoke by videoconference via an interpreter and received loud applause.

“We need weapons more than anything else,” Anastasia Radina, a Ukrainian parliamentarian who came to Davos, had already indicated to the press on Sunday evening.

Ukraine needs weapons “like those of NATO”, including tanks, air defense systems, fighter planes, she detailed to AFP, estimating that the military aid received so far now, “it’s still not enough”. 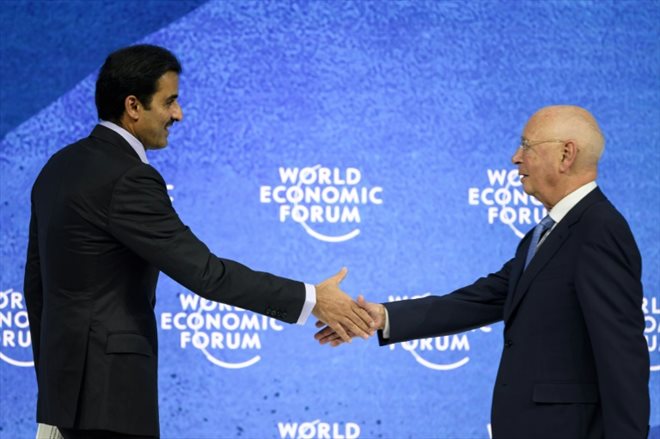 “After three months of war, and tens of thousands of lives lost, we are still discussing whether we need fighter planes. Frankly, it’s scandalous,” she lamented.

The Ukrainian government is also calling for tougher sanctions against Russia, which it would like to completely isolate from international trade.

“There should be no trade with Russia,” said Mr. Zelensky, calling among other things for “an embargo on Russian oil” and measures against “all Russian banks, without exception”.

Western countries have implemented a whole series of economic sanctions against Russia. But if the United States and the United Kingdom have given up importing Russian oil, the European Union is struggling to agree on the subject, because some of its member countries are very dependent on gas and oil. Russians.

“We understand that Europe is trying to estimate the cost that this will have for its economy. But on the other side, there is Ukraine, there is a real war”, insisted the Ukrainian minister of the Economy Yulia Svyrydenko, who came to Davos in person. “Russia wants to destroy Ukraine (…) and threatens the world with famine. We definitely don’t have time for analysis. We need to cut Russia off from the civilized world, completely.” 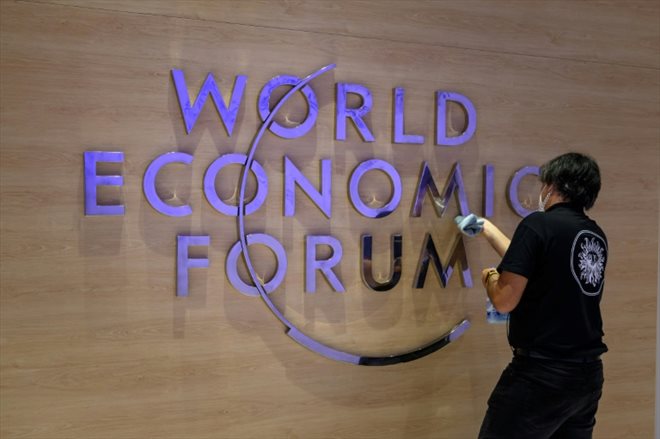 An employee cleans the logo of the World Economic Forum (WEF) inside the congress center in Davos, Switzerland, on May 22, 2022 (AFP/Fabrice COFFRINI)

Ukraine takes center stage this week in Davos, where the meeting of global political and economic elites organized by the WEF returns after a two-year hiatus due to the Covid-19 pandemic.

WEF founder Klaus Schwab on Monday praised the Ukrainian president’s “courageous leadership” and welcomed a “particularly strong delegation of Ukrainians”, but this year banned the Russians, who usually make up a large contingent of participants .

Where a “Russian house” stood in other years, the Ukrainians have been exposing their “war crimes” since Monday. They thus hope to better convince the international community to step up its support.

“Everyone is affected by what is happening in your country,” Klaus Schwab also told the Ukrainian president.

Ukraine is notably a major world supplier of cereals and oilseeds, which it can no longer export today via its ports, blocked by the Russian army. The situation is fueling soaring global food inflation and creating fears for food supplies in many countries, particularly in Africa.

Volodymyr Zelensky said he spoke to the European Union, the United Kingdom, Turkey and UN officials to try to establish a “corridor that would allow us exports of our wheat, our sunflower, and ‘other grains’.

The Emir of Qatar, Sheikh Tamim bin Hamad al-Thani, for his part offered his services as a potential mediator. “We are in contact with all parties involved in the Ukrainian crisis, and I am ready to contribute to all international and regional efforts to find an immediate and peaceful solution to the conflict,” he said during a speech. in Davos.