Strato: email address and professional domain for only 25 cents

“Arena” for equality – women: really discriminated against or only in the “victim role”? – News

The worrying decline in French productivity Pamela Ponce in the kitchen of her apartment which she can no longer heat due to the high price of electricity, on January 26, 2022 in Madrid (AFP / OSCAR DEL POZO)

In her apartment in the suburbs of Madrid, Pamela Ponce no longer turns on the radiators, despite the biting cold that enters through the windows. “The prices are too high, I no longer have a choice,” sighs this mother in a resigned voice.

On this January morning, the temperature does not exceed five degrees outside. Inside, “it can also be very cold, especially when there is no sun”, specifies the young woman, while showing the three-room apartment where she lives with her mother and her two sons in Leganès.

This 32-year-old Peruvian says she has not been able to pay her electricity bills for “three months” now, while the price spike reached 72% in 2021 in Spain – one of the largest increases in the European Union .

“Before, I paid 35 to 60 euros per month. Now it exceeds 100 euros, not including gas, which has also increased”, explains Pamela Ponce, unemployed since a severe Covid infection which left her with serious consequences. , especially the left hand.

“I don’t know what to do anymore,” sighs the 30-year-old, dependent on her ex-companion to pay her rent and food for the home. “I feel asphyxiated, suffocated,” she adds, her throat tight.

To heat her home somehow, this former housekeeper bought a device equipped with a gas cylinder, which she transports from one room to another as needed – “it’s more economical” , she assures.

Everything else is subject to rationing. “My sons only shower every other day” and “I usually cook for two or three days, so as not to turn on the stove too much”, adds the young woman.

Pamela Ponce is far from alone in this situation. “More and more families are struggling to pay their bills” and “have to choose between food and electricity at the end of the month,” says Sara Casas, environment manager for the Spanish Red Cross. 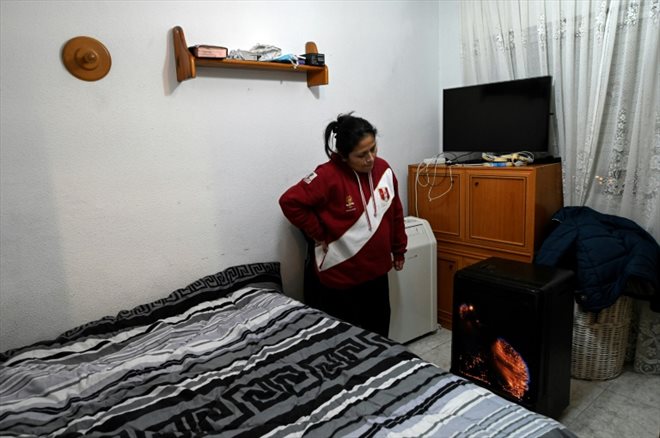 Pamela Ponce uses a device powered by a gas cylinder to heat her room on January 27, 2022 in Madrid (AFP / OSCAR DEL POZO)

Spain’s left-wing government, however, announced in early July and then in September a series of tax cuts intended to reduce consumer bills. But these measures were not enough to offset the rise in prices.

According to the Organization of Consumers and Users (OCU), the electricity bill of Spanish households has thus increased from 675 euros in 2020 to 949 euros in 2021, an increase of 41% in one year. Compared to 2018, the year of the previous record, the increase reached 18%.

Vulnerable people, such as “single women with children, low-income elderly people and migrants”, are particularly affected, especially since “many have difficulty accessing state aid”, due to a lack of documents. rule, underlines Sara Casas.

According to Médecins du Monde, which has launched an awareness campaign on the subject, 6.8 million Spaniards out of nearly 47 suffer, to varying degrees, from “energy poverty”. 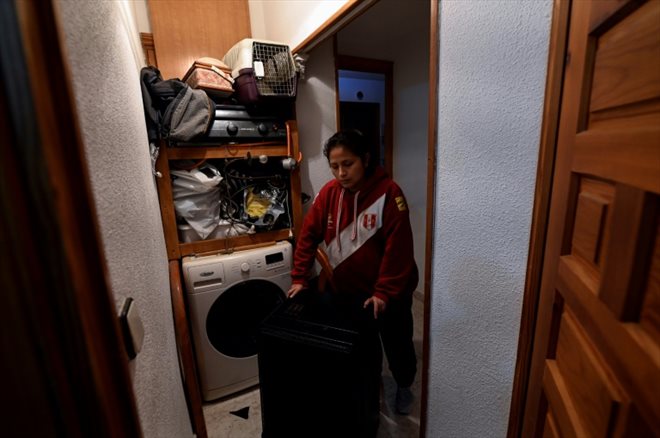 Pamela Ponce moves from one room to another a device that runs on a gas cylinder to heat her apartment on January 27, 2022 in Madrid (AFP / OSCAR DEL POZO)

A situation which “promotes chronic bronchitis, depression and anxiety”, underlines the NGO.

Among them, Raul, a 55-year-old computer scientist based in La Coruña (north-west), with his wife, daughter and 82-year-old mother-in-law. “Here, as soon as we turn on an electrical appliance, we think of the bill”, says this father, who does not wish to give his surname for reasons of confidentiality.

Victim of a stroke in March 2021, he is now unemployed and depends solely on his spouse’s salary.

“My neurologist tells me that I have to avoid stressing. But it’s very difficult when you don’t know if you can pay your bills the following month”, says the 50-year-old, who admits to having hardly lit winter heating, despite the “cold” and “humidity”.

“For my mother-in-law, we bought a heating blanket” and “in the house, I systematically put several sweaters or even coats”, explains the father of the family, forced to start manufacturing a traditional heater.

“It’s a palliative”, specifies Raul, who says to cross his fingers “so that the prices end up falling”.