Sudanese people harvest gum arabic sap from an acacia tree in a field east of El-Obeid, the capital of North Kordofan state, on 9 January 2023 (AFP/ASHRAF SHAZLY)

The gum arabic essential for the world’s production of soft drinks comes from the acacia tree in the arid zones of Sudan, where the tree is resistant to increasingly extreme temperatures, but farmers are now struggling to cultivate it.

The acacia gum tree is “an important tree for combating desertification, as it resists drought and increases soil fertility, which is essential for increasing agricultural production”, explains Fatma Ramly, national coordinator of the Federation of Producers gum arabic, which has seven million members.

Made from hardened sap taken from the acacia tree, gum arabic is an almost irreplaceable emulsifier for global industries. This natural ingredient is used in everything from soft drinks to chewing gum to pharmaceuticals.

It is the pride of Sudan, which is the world’s leading producer of gum arabic with 70% of trade, according to the French Development Agency.

The gum has even earned Sudan, which has been under an international embargo for decades, a special exemption from the United States, whose food and pharmaceutical industries are far too fond of it. It is indeed an essential component of… Coca-Cola!

But to harvest the precious sap, man must endure the same extreme climatic conditions as the acacia, one of the trees in the world that adapts best to drought and climate change.

“We work for hours under a scorching sun” to end up “earning just enough to buy water until the rainy season,” Moussa told AFP. 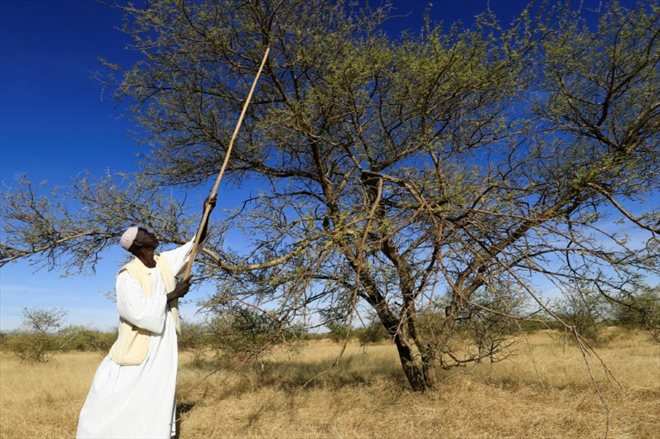 A Sudanese man uses a long wooden tool with a sharp metal edge to harvest gum arabic sap from an acacia tree in a field east of El-Obeid, the capital of North Kordofan state, the January 9, 2023 (AFP/ASHRAF SHAZLY)

In Kordofan, the rise in recorded temperatures is double the world average, or two additional degrees in less than thirty years, according to the UN agency for food and agriculture.

Humans struggle to cope with the arid climate and desertification. Added to the drought is the fluctuation in world prices for gum arabic.

Many farmers therefore prefer to cut their acacias and sell them to make charcoal, in order to have a more stable income, or work in nearby gold mines. Like the four of Abdelbaqi Ahmed’s five sons, who opted for the hard work of mining rather than caring for their father’s acacia trees.

Same thing for Abdallah Babiker: his three sons prefer to dig the ground with a pickaxe than to climb in the acacias. “They want a job that pays more,” says the 72-year-old.

Faced with this situation, Sudan, which exported 88,000 tons of gum arabic in 2021 for 110 million dollars, according to the Central Bank, is working to replace the acacia trees felled for firewood or construction.

“We have tried to replant trees in the areas that have deteriorated and to prevent the gum arabic belt from receding,” says Ms. Ramly, who works for Sudan’s Forestry Department, referring to this area of ​​around 500,000 square kilometers which goes from Darfur, a Sudanese region bordering Chad, to Gedaref, near Ethiopia. 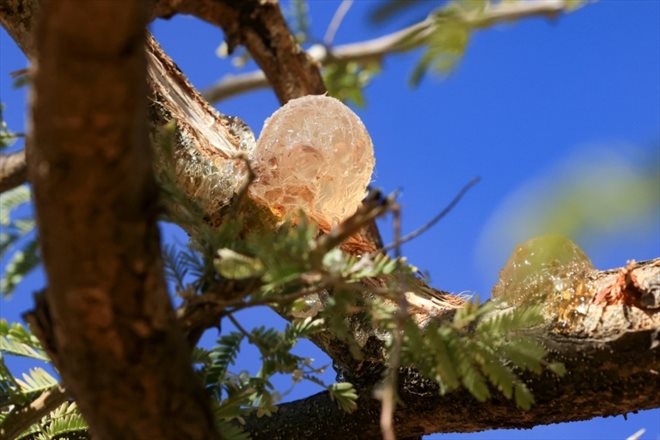 Arabic gum sap on the branch of an acacia tree, in a field east of El-Obeid, the capital of Sudan’s North Kordofan state, on 9 January 2023 (AFP/ASHRAF SHAZLY)

Recently, the Food and Agriculture Organization of the United Nations (FAO) granted $10 million to the Department of Forestry to help acacia growers maintain their livelihoods. This aid also aims to finance the “Great Green Wall”, a mega-project supposed to cover the African strip from the Sahel to the Horn of Africa with trees, with the aim of containing the ever-growing desert. pitch.

“The drought is one of the main difficulties for the inhabitants” living where the acacia is cultivated, explains to AFP Madani Ismaïl, assistant professor at the Public Institute of Agricultural Research.

Abdelbaqi Ahmed knows something about it, he who has been incising the bark of his acacia trees for more than 30 years to remove the liquid which quickly solidifies into dented amber-colored balls.

“It was my family who taught me (this) hard work,” the 52-year-old man, owner of nearly 30 hectares of acacia trees planted in the village of Botei, told AFP.

Mohammed Moussa taught his profession to his children “even if they weren’t interested. At least that way, if they have nothing else, they can use it”.