In the absence of officially having its candidate, the Republic En Marche has its leaflet for the presidential election. Europe 1 has obtained this document which will be distributed in 500,000 copies this weekend in France by Macronie activists. Above, neither measure, nor program, not even a candidate. But the intention is clear: to prepare the ground for Emmanuel Macron.

Not yet a candidate, Emmanuel Macron already has his campaign leaflet. La République En Marche will launch a vast towing operation this weekend in view of the candidacy of the Head of State in the presidential election. Europe 1 has obtained this document which will be distributed in 500,000 copies this weekend. It is therefore a new stage for Macronie. After defending the results of the five-year term between September and December, the members of the presidential majority are preparing to campaign with a new slogan: “With you”.

‘With you’, two words written in blue and red on a white background

35,000 posters were put up overnight from Wednesday to Thursday in 16 metropolises. The “Avecvous2022.fr” website has been put online and 140,000 additional posters will be put up this weekend throughout France. And in parallel, the activists are preparing to distribute 500,000 leaflets.

On this document obtained by Europe 1, we can read: “You hardly recognize yourself in the statements of the various candidates for the presidential election: it’s normal, they don’t talk about you, they talk about them” . A macronist strategist assures him, “our intention is to put the French back at the heart of the system”.

No measure, no program… no candidate

A new strategy which should be Emmanuel Macron’s campaign axis. “Our goal is not to campaign against a camp, or worse, against a part of the French. It is to campaign for, and to campaign with”, can still read on this leaflet. 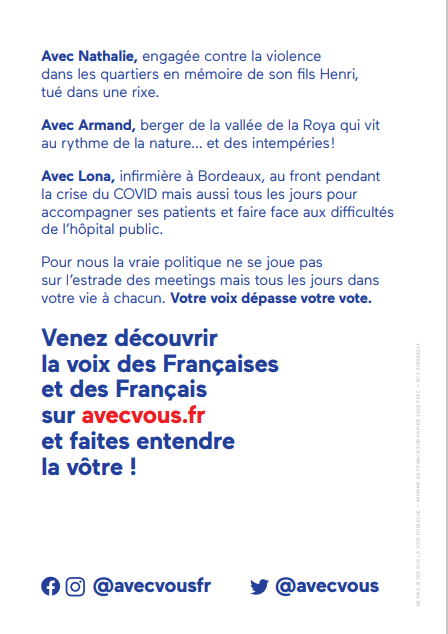 No measure, no program, not even a candidate on this document. But the intention is clear: to prepare the ground for Emmanuel Macron, whose candidacy is becoming clearer. According to several sources, the space time that emerges is between February 10 and 15. And a sign that these two words “With you” should take a considerable place in the campaign of the Head of State, since Thursday morning they have adorned the facade of the new headquarters of LREM, rue du Rocher in Paris.