Find the summaries of the matches of the 35th day of Ligue 1.

Very bad operation for Marseille. OM, tired, lost at home to Lyon (0-3) and saw Rennes and Monaco come back to three points with three days left to play. The Marseillais may be paying for the sequence of matches with the Europa League Conference. Jorge Sampaoli’s men, who will travel to Lorient and then Rennes over the next few days, will host Feyenoord for the C4 return match on Thursday evening. Be careful not to lose everything for Marseille.

For its part, Lyon confirms its double face this season and its irregularity which prevents it from aiming higher. While at the Vélodrome, Les Gones, who can still grab 3rd place mathematically, showed that they could have done better…

Bordeaux is suffocating. With a new defeat, against Nice (0-1), the Girondins see the specter of Ligue 2 approaching fast. There are three games left for the Bordelais to save themselves. Nice, for its part, which will play the Coupe de France final against Nantes on Saturday, is fifth, two points from the podium.

At home, Lorient let slip very valuable points in the quest to maintain against Reims. However, the Merlus had opened the scoring after a magnificent goal from Moffi. But the Rémois, already assured of maintenance, reversed the score to afford three points.

The Messins can bite their fingers. While three precious points were reaching out to them, Frédéric Antonetti’s men, who led 0-2 in the 79and minute, saw Montpellier come back to the score thanks in particular to a goal from Wahi in added time.

Bad operation for Clermont. On the move to Brest, the Auvergnats lost (2-0) and remain under pressure from Saint-Etienne and Bordeaux.

Fourth, ASM is ready for the slightest misstep from Rennes and OM. And the Monegasques continue to put the pressure on with another victory. This time against Angers (2-0).

Spectacular match at the Aube stadium. ESTAC won 3-0, with three penalty goals (doubled by Tardieu and Ugbo) while Lille finished the match at 9 after the expulsions of Renato Sanches and Burak Yilmaz. Troyes takes a big step towards maintaining, Lille says goodbye to Europe.

Stade Rennais is on the podium. The Bretons won quite easily against Saint-Etienne, who are still struggling to maintain. The Rennais thus put pressure on OM who play Sunday evening against Lyon. 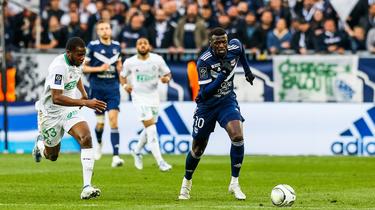 Led 0-2 at home after a double from Simon, Lens managed to save the day against Nantes (2-2) and is still in the race for Europe.

Champion of France, PSG went to make a spectacular draw in Strasbourg. After being led following a goal by Kevin Gameiro, former home, the Parisians nevertheless took the advantage to count two goals in advance. But the club from the capital, as too often this year, was taken over by the Alsatians who equalized in added time.