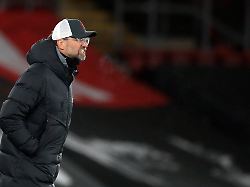 No win for the third time in a row, no goal for the second time in a row: Liverpool FC and Jürgen Klopp lose against Southampton FC with coach Ralph Hasenhüttl. Despite dominance, the Reds only get a single shot on goal – and now have to fear for the championship lead.

Team manager Jürgen Klopp is in deep form with Liverpool FC. The English football champions lost 0: 1 (0: 1) at Southampton FC. The Reds remain at the top of the table despite the third game in a row without a win, but the tied pursuers Manchester United have played one less game and could take over the top of the table on the next match day. On January 17th there will be a direct top duel between the old rivals.

Both teams went into the game with similar form curves: The Reds had not won two games before, Southampton not four times. But Saints coach Ralph Hasenhüttl was allowed to stand on the sidelines again. In the 0-0 win against West Ham, he was not on site, but only switched on via video camera because his wife had previously been infected with the corona virus.

Southampton caught the reigning English champions with a cold shower after just 120 seconds. Trent Alexander-Arnold did not defend a free kick well, calculates the ex-Liverpool player Danny Ings spooned the ball with an arc lamp and without looking over goalkeeper Alison Becker into the goal.

Liverpool can't think of anything

Thiago was there from the start for the Reds, only for the second time since his move from Bayern Munich. The Spaniard made his debut in mid-October in the Merseyside derby against Everton (2-2) and injured himself in the process. Even after that, knee problems plagued the midfield motor again and again. The lack of match practice was noticeable to the ex-Munich player, already in the third minute he came too late with a tackle and saw the yellow card. Then there were a few bad passes, but overall Liverpool FC lacked liveliness.

Klopp's team burned off a brief firework of offensive pressure after conceding an early goal, but could not create any real opportunities. Sadio Mané shot over the goal after a beautiful Thiago pass, Mohamed Salah headed over to Mané's cross. The Reds failed to score a shot on goal in the first half. The Hasenhüttl team defended compactly and came up with quick and precise scoring chances against highly pressing Liverpoolers. Joker Nathan Tella almost made it 2-0 just before the break. The second balls also mostly ended up with the Saints.

The Liverpoolers came out of the cabin with a lot of pressure. They had 90 percent possession in the first seven minutes. The Saints were very lucky with a possible handball, which the VAR did not check. Then the master pressed steadily and let the ball circulate, but still no shot on goal succeeded until the 75th minute: Significantly, Mané stepped into the ground with his left-footed shot and in the end only a harmless shot jumped out. Shortly afterwards, Alexander-Arnold's attempt rushed past the left post from a distance.

Sometimes with ten men in the penalty area, Southampton defended, but at times also pressed cleverly and very high. And the Saints finally had the best chance of the second half with a late long ball: Yan Valery tunneled the rushing Alisson and the game device spun towards the empty goal – but the attempt lacked the power, the defense of the Reds just cleared.

Just before the final whistle, Mané headed just over the crossbar. Then the otherwise highly praised Liverpool offensive remained without a goal for the second time in a row. With the final whistle, Hasenhüttl sank to his knees with tears in his eyes – his team is now only four points behind the Reds.