The Legend of Zelda: Tears of the Kingdom is available for pre-order, here’s where to buy it

at least two dead in a Russian bombardment in Kramatorsk

Djamila Rowe: Jungle camp was “the most beautiful experience”

Men can also go through menopause. The decline in sex hormones is different from that of women. Which symptoms can be used to recognize the so-called andropause and how to alleviate symptoms.

Men also go through menopause – although some don't notice anything.
© iStock.com/Nikada

Menopause in men (climacteric virile or andropause) is, in contrast to the female climacteric, a fairly unknown phenomenon. But even the male body can experience a decline in sex hormones from a certain age. However, it is insidious, while menopause begins more abruptly in women in mid-life.

Not all men go through menopause

The decline in sex hormones does not cause symptoms in all men; only about one in ten men is affected. Many complaints of the aging process have other causes than a changed hormone level and are, for example, psychological. According to one study, three sexual symptoms are directly related to decreased testosterone levels. These include erectile dysfunction, decreased sexual desire, and less frequent morning erections.

Testosterone Decline as a Cause of Menopause in Men

The production of the sex hormone testosterone in the male body increases around the age of 30. After that, it remains at the same high level until it declines by around 1.2 percent annually from around the age of 40. This results in a continuous decrease in the testosterone available to the body. This slow decline is due to age-related breakdown in the testes or brain regions that control hormone levels. At the same time, the proportion of globulin (SHBG) that binds sex hormones increases.

In contrast to women, who suffer from a severe deficiency in estrogen due to menopause, men only experience a gradual, moderate decline in sex hormones. In most cases, the reduced hormone production does not lead to any symptoms. Some medical professionals therefore find it inappropriate to speak of "menopause" at all in men. In professional circles, the more differentiated terms "partial androgen deficit in aging men (PADAM)" and "partial endocrine deficit in aging men (PEDAM)" are preferred.

Menopause in men – like menopause in women – is not a disease, but a natural phase of life that mainly affects men between the ages of 40 and 55. It is assumed that men’s menopause is over by the age of 75 at the latest.

The weak points of the stronger sex

Only a doctor can diagnose whether the occurrence of one or more of the symptoms mentioned above is a sign of menopause in men, or whether the symptoms are due to other causes, such as organ disorders.

After a detailed discussion with the doctor (ideally a urologist or endocrinologist) about the symptoms, a physical examination follows. Its main purpose is to rule out organic causes for the symptoms.

Whether an andropause is present can only be clearly determined with a blood test. The concentration of sex hormones in the blood is measured. If it is lowered and the man is in the advanced phase of life, the diagnosis of menopause in men is quite likely.

If the testosterone falls below a certain value and diseases such as lipid metabolism disorders, obesity or diabetes arise, doctors pay attention. Because the hormone influences these ailments – and the diseases in turn affect testosterone levels. Then it can make sense to treat with testosterone to break the vicious circle.

Do not use hormone replacement therapy for menopause lightly in men

Testosterone is important for muscle building, bone density, the formation of red blood cells as well as the metabolism in adipose tissue, sex life and fertility. A drop in testosterone in the blood alone does not make a man sick.

Since the decline in hormone production is a natural process, it is usually not necessary to treat menopause in men. Classic hormone replacement therapy (HAT), as it has been used for years in women to relieve menopausal symptoms, does not exist for men. While it is possible to use testosterone replacement treatment, it is not yet a standard practice.

Given the numerous side effects, the administration of hormones to relieve symptoms of andropause is controversial. It always depends on the individual case whether replacement therapy is indicated; testosterone is suspected of promoting the development of prostate cancer. Therefore, testosterone substitution must not be made in the presence of hormone-sensitive prostate cancer. In addition, there are still no reliable long-term studies on the use of hormones against the symptoms of menopause in men.

Potency enhancers may be considered to treat loss of libido and erectile problems. As these affect the cardiovascular system and can have serious side effects, they should only be used under medical supervision.

Accept the new phase of life

The fact that the body changes with age is a natural process in everyone's life. Aging processes are not necessarily caused by a falling proportion of sex hormones.

A positive attitude towards life has a decisive influence on the course of menopause in men. So it is advisable to accept menopause as the beginning of a new phase of life and to keep the body fit with a healthy diet and exercise.

Menopause in men cannot be prevented

An age-related decrease in the production of sex hormones, which is based on andropause, cannot be prevented.

A healthy lifestyle with a balanced diet and sufficient exercise keeps the body fit even in old age. At the same time, the typical menopausal symptoms in men can also be somewhat reduced. 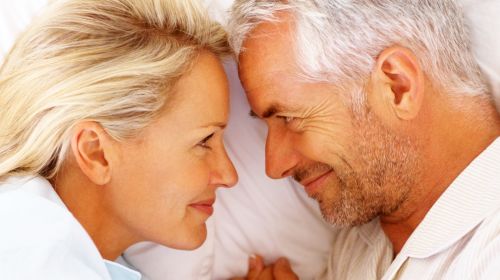