If the toenails or fingernails are infected with a fungus, it can be an ugly sight. The earlier treatment starts, the better. Often, however, you need patience until the nails are healthy again.

Walks on the beach and flip-flops in summer, sauna and swimming pool in winter: People with nail fungus often have to overcome this. Once the infection has progressed, the unsightly sight of the nails gnaws at self-confidence.

According to a study, 12.4 percent of the German population, almost 10 million people, are affected by nail fungus – medically onychomycosis or tinea unguium – and the risk increases with age. You don't have to live with the disease: there are good therapeutic options, but they require some discipline and perseverance.

Deformed, discolored and crumbly? The symptoms

Depending on the stage, nail fungus manifests itself through typical symptoms, including:

Initially only slightly cloudy, the nails become more and more colored due to the fungal attack until the toenail or fingernail often appears completely yellow, brownish or even greenish. "It usually starts from the edge of the nail," says Professor Martin Schaller, deputy medical director of the University Dermatological Clinic in Tübingen. Another symptom: "The structure of the nail plate changes, it becomes thicker, there is deformation." The nail substance infected with fungi then crumbles. The nail often comes off in the course. In this case, doctors speak of distal subungual onychomycosis.

Another common form of nail fungus is white, superficial onychomycosis. This leads to small white spots that spread out in the course until white stripes run across large parts of the nail. No matter what type it is: "If you suspect that you have nail fungus, you should always see a dermatologist," advises Dr. Peter Arne Gerber, senior consultant at the Department of Dermatology at the University Hospital Düsseldorf. A dermatologist will examine the nail substance and treat it with the appropriate agents depending on the stage and form of the infection.

Even if lasers are aggressively advertised as a therapeutic measure by companies and propagated by some doctors: "There are no good studies to prove that lasers as a single measure completely eliminate the fungus," said Gerber. A very high temperature of over 50 degrees Celsius would have to be reached to kill the nail fungus: "Not tolerable for the patients," says dermatologist Schaller.

Specialists therefore rely on systemic therapy to combat fungi and their spores.

Over the counter varnishes can often be successful if the nail is only slightly affected by the fungus. However, the treatment should continue until healthy nail has grown again. This can take around six months for fingernails and up to a year for toenails. If you stop the therapy after a few weeks, there is a high probability that fungal spores will survive under the nail plate and the fungus will break out again. You should have a doctor assess in advance whether therapy with an over-the-counter varnish is sufficient.

It is tempting for women to paint colored nail polish over the unsightly, fungus-infested nails. Some patients also see glued-on gel nails as a way to hide the infection. However, medical varnishes have to be applied every day and the course of the nail fungus can hardly be observed with colored varnishes and gel nails. Specialists therefore advise against the treatment of cosmetic varnishes and artificial nails.

How useful are home remedies for nail fungus?

Dab your nails with vinegar essence in the morning and evening and take footbaths with tea tree oil: nail fungus sufferers report on their experiences with home remedies in internet forums. "Whoever heals is right," says dermatologist Peter Arne Gerber: "However, conventional treatment methods and a visit to the doctor usually result in better results."

How to get infected

"Athlete's foot is often preceded by athlete's foot," explains specialist Martin Schaller: "It usually begins in the narrow spaces between the toes, which is shown by swollen and itchy skin". The fungus can also spread over the sole until it reaches the nails.

The big and small toenails are most often affected because they are on the outside and are therefore more susceptible to minor injuries. Through this the fungus can easily penetrate the nail and spread.

You can prevent nail fungus with these seven tips

A few simple measures prevent a yeast infection. Seven rules from the expert: 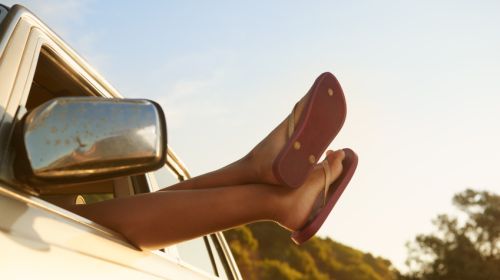