The Paris police headquarters issued, this Thursday, February 10, an order to ban the “freedom convoys”, which must join Paris this Friday to denounce the health restrictions.

“Because of the risk of public order disturbances that this gathering could cause, the Prefect of Police is issuing an order prohibiting such demonstrations, from Friday February 11 to Monday February 14,” the prefecture said in a press release.

Leaving from the south of France on Wednesday, hundreds of motorists responded positively to several calls on social networks, in order to protest against the health restrictions imposed by the government.

The police headquarters recalled that the fact of “obstructing or hindering a road open to public traffic” is punishable by two years’ imprisonment and a fine of 4,500 euros.

In addition, the prefect of police gave instructions “of firmness to the internal security forces with regard to any contravener of these provisions”. 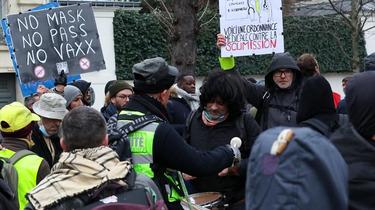 A specific device will be put in place by the prefecture to prevent the blocking of roads, verbalize and arrest offenders of this ban on demonstrations.

The “freedom convoys” are inspired by a movement launched by Canadian truckers, hostile to health measures against Covid-19.