In the future, you will need a Google account to enjoy your Fitbit watch

Dr. STONE for parents: 3 minutes to understand everything about this anime that makes you love science

Lara Fabian mother of Lou, 14 years old: her daughter stands out… in a field far from music!

Zelda Tears of the Kingdom: I hope breakable weapons are back! Peruvian President Pedro Castillo announced on Tuesday an early lifting of the curfew in effect since dawn in Lima, intended to contain protests by carriers over fuel prices, but which has sparked criticism and misunderstanding.

“From now on, we will lift this curfew. It is appropriate to call on the Peruvian people to calm down,” said the radical leftist president, standing alongside the speaker of parliament, opponent Maria del Carmen. Alva, after a meeting with parliamentarians.

“The measures taken, like those of yesterday (Monday), are not against the people, but to protect the lives of our compatriots”, added Mr. Castillo, a 52-year-old former teacher and trade unionist who is facing his first conflict. social since his election in July 2021.

The curfew had been in effect since dawn in the capital and the nearby port of Callao where 10 million people live. It was originally to be held until midnight.

Its lifting was greeted with cries of joy by the hundreds of demonstrators gathered not far from Parliament and in several districts of the capital, noted AFP journalists.

“President Castillo announces the lifting of the curfew. The people made it possible!” tweeted Maria del Carmen Alva.

Announced Monday evening on television by the president, the curfew had created the surprise, the demonstrations of carriers against the increase in the price of fuel having taken place outside the capital. 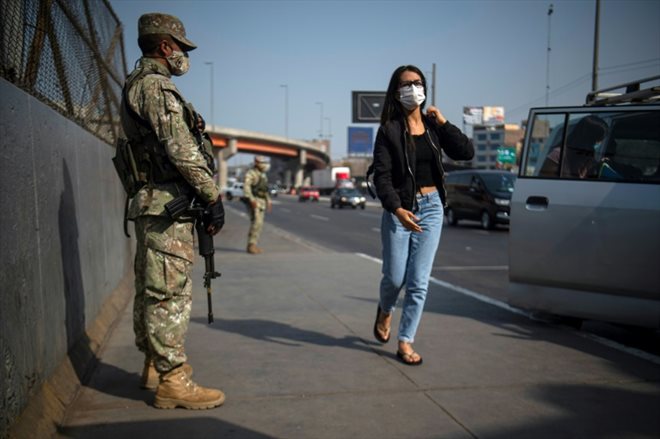 Soldier on the Pan-American highway in Lima to enforce the curfew, April 5, 2022 (AFP/Ernesto BENAVIDES)

Residents demonstrated in several neighborhoods of Lima on Tuesday with banners saying “Castillo out!” and banging pots, a traditional form of protest in Latin America.

“We are marching against Castillo’s measures. The people without work, with a curfew, we are fed up!” Nelson del Carpio told AFP.

Clashes continued Tuesday evening in Lima in front of the Parliament. A group of protesters broke into the nearby courthouse, caused damage and removed computer equipment, according to the Interior Ministry. Twenty-five police officers were injured.

Faced with criticism, the Head of State had decided to meet the representatives of the opposition who hold the majority in Parliament to “discuss and consider a way out of the crisis”.

The curfew came as Peru’s economy struggles to recover from the very long lockdown imposed by authorities to contain the coronavirus pandemic and many Lima residents survive from informal jobs and small street stalls.

Policeman checking vehicles at a police checkpoint in Lima on April 5, 2022 (AFP/Ernesto BENAVIDES)

The vast majority of businesses and schools remained closed and public transport was suspended. But despite the deployment of police and soldiers, many residents did not respect the measure which caused misunderstanding.

“It was a very late and improvised measure,” complained Cinthya Rojas, a hospital nutritionist at a bus stop in the municipality of Agustino, in eastern Lima.

The former left-wing presidential candidate, Veronika Mendonza, whose party had collaborated with the head of state at the start of her term, expressed her “total rejection of an arbitrary and disproportionate measure”.

“We had information that there were going to be acts of vandalism. This is the reason why we took this measure”, justified the Minister of Defense, José Gavidia.

Mr. Castillo recently escaped a second impeachment procedure in Parliament where the opposition castigates his lack of governance, and accuses his entourage of corruption.

Clashes between protesters and police took place Monday in several regions of Peru on the sidelines of a strike by transporters against the rising cost of fuel and tolls, as well as foodstuffs.

The Pan-American highway, which connects South America to the United States via Central America, was blocked to the many trucks that use it and toll booths were set on fire.

The government abolished a fuel tax last week in an effort to appease the situation and also decreed a 10% increase in the minimum wage which will reach the equivalent of 277 dollars from May 1.

Insufficient measures for the General Confederation of Peruvian Workers (CGTP), the country’s main union, which called for new rallies on Thursday.