France: Mobilization Tuesday in the energy sector for wages

Leonardo Del Vecchio, the disappearance of an extraordinary boss

Google should soon release its very first connected watch. Included in the Pixel range, it would be equipped with Wear OS, Google’s operating system. Although it is not yet official, the leaks have already given us a lot of information about it. Summary of what there is to know about this product.

What is the Google Pixel Watch release date?

We’ve been talking about the imminent release of a Pixel Watch for years. We thought for a time that the Pixel Watch would be launched in October 2021 , along with the Pixel 6 and Pixel 6 Pro. But it has not happened. In April 2022, Google carried out a facelift of its online store, putting its “watches” section forward. Although the Pixel Watch is not there, it suggests that the announcement is imminent.

At what price will the watch be marketed?

Currently, no reliable leaks came out regarding the price of the upcoming Pixel Watch. We don’t know if the watch would be mid-range or high-end. It is very likely that Google will launch several versions (WiFi and 4G LTE in particular) of its Pixel Watch, which would allow it to cover a wide price range while meeting the needs of most users. One of the models would be sold between 300 and 400 dollars.

What is the design of the watch envisaged by Google?

According to the first renders of the Pixel Watch, Google would opt for a design built arounda rounded borderless screen. The edges around the touch screen are very curved. A physical touch similar to the Apple Watch crown would be visible on the right border. Google would accompany the watch case with a silicone strap available in several colors: white, black, blue, orange and blue. Note that the silicone strap is directly in contact with the case of the smartwatch. 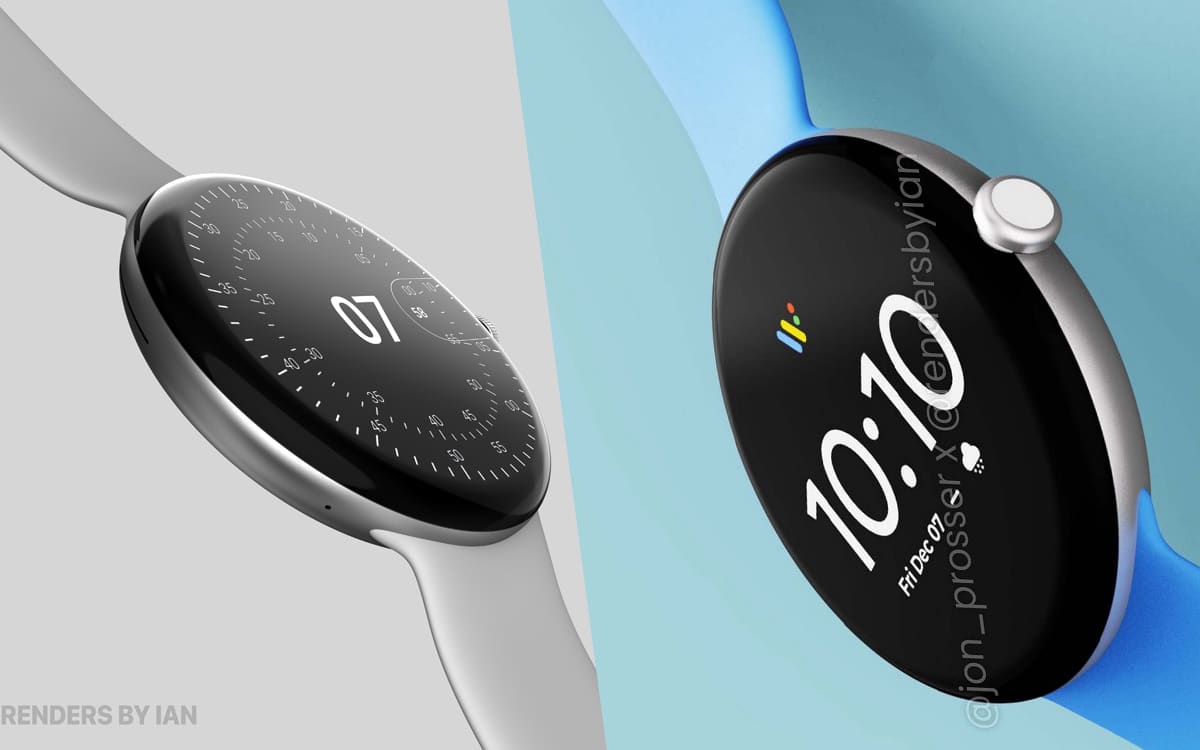 On December 6, 2021, leaker Jon Prosser posted a stolen photo of what appears to be a Google presentation. This visual tends to confirm the design of the watch:

Evleaks has added its stone to the building by publishing a front rendering of the terminal:

Like the iPhone 4 in 2010, a prototype of the Pixel Watch forgotten in a restaurant came to confirm all previous leaks. This one sports a very curved screen on all sides. We also find a physical crown between two buttons on the side of the watch. On the back of the device, you can see an optical heart rate sensor. Unfortunately, according to the source who managed to get their hands on the device, the watch did not want to go beyond its start screen and therefore there are no pictures of her on the home screen. Finally, on the dimensions side, we now know that the Pixel Watch measures approximately 12.7 mm thick and 38.1 mm in diameter.

Additionally, we learned that the watch will be available in two different sizes, including a 40mm model. The design of both versions will be identical to that of the prototype of the restaurant, and the watch will be composed of metal and stainless steel. The back of the watch will use glass around the sensors. Three colors for each version: shiny silver, shiny gold and matte black.

What is the spec sheet of the Pixel Watch?

Google uses Qualcomm SoCs for its smartphones, it should be the same for its Pixel Watch. Like Apple, Google should put on an AMOLED screen. The Pixel Watch would embed an integrated circuit for power management directly in the chipset, the purpose of which would be to allow the connected watch to listen constantly thanks to the microphone. It would then be possible to invoke Google Assistant without having to press a button beforehand while maintaining good autonomy. The name of this feature is “Blackghost”. 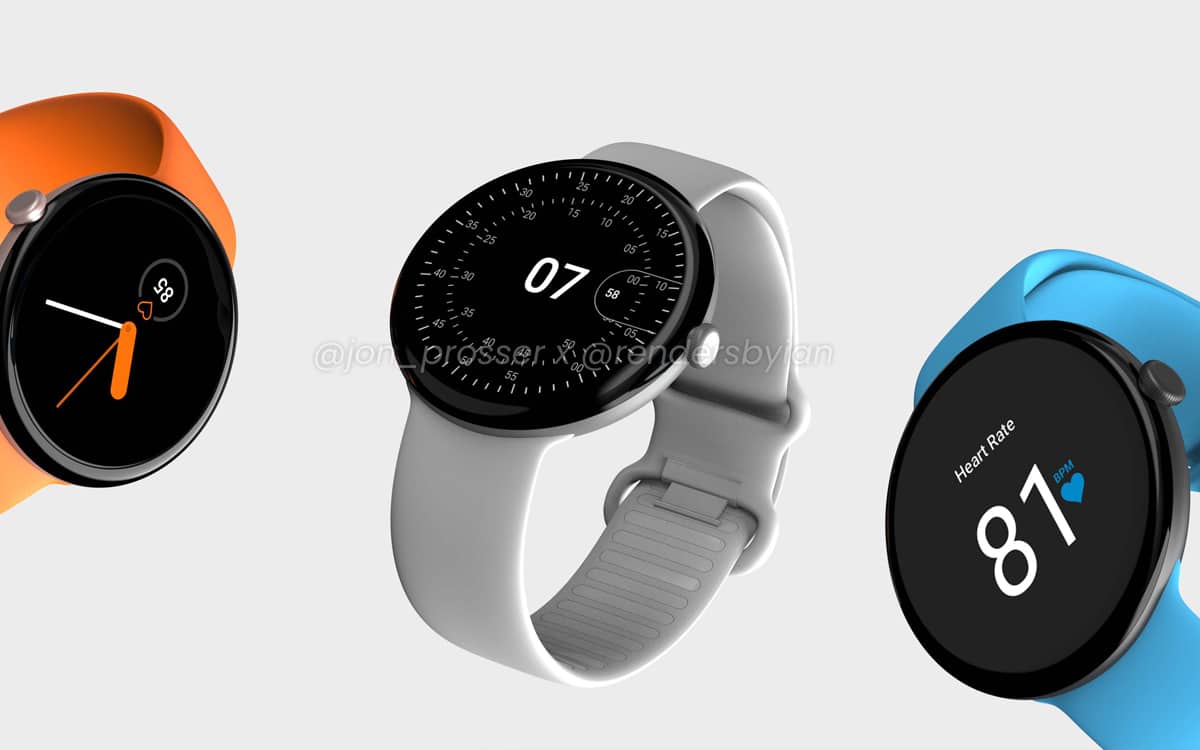 the Pixel Watch would benefit from the same sensors as the Galaxy Watch 4, including the electrocardiogram (ECG).

What software and features are embedded in the connected watch?

With its Pixel Watch, Google aims to promote the qualities of its operating system: Wear OS (formerly Android Wear), a version of Android designed for wearables. And of course, that starts with seamless integration with Google’s ecosystem and services. The Pixel Watch will necessarily benefit from Google Assistant, with the possibility of displaying information on the screen via a voice command such as the weather, upcoming appointments registered in Google Calendar, reservations, information on the status of his flight…

Another essential feature for a Google connected watch, the possibility of paying contactless by NFC. It’s the fastest and easiest way to make a physical purchase today: no need to take out a bank card or a smartphone, just put your wrist near the reader. Wear OS already manages Google Pay, it is unthinkable that such an option is not available on the Pixel Watch.

The Google Calendar calendar as well as the Google Keep notes will also be available at any time on the watch screen. To find your way, you will no longer need to take out your smartphone every two seconds thanks to Google Maps. You can also monitor the status of your Uber ride without having to take your mobile out of your pocket. On the communication side, Wear OS supports Gmail, Messages and Telephone, with the display of emails, SMS or calls that you receive, but also the possibility of answering them thanks to voice input from the smartwatch equipped with a microphone.

The Pixel Watch will obviously not be able to ignore the functionalities related to sport or activity monitoring: step counter, heart rate measurement, number of calories burned, distance traveled, travel time… All your results will be able to be displayed via Google Fit but also via third-party applications such as Runastic, Strava or Lifesum.

And finally, the music. Changing songs or adjusting the volume is not very convenient from the smartphone in full physical activity. Not all audio devices (headphones or earphones) have a simple control to perform these actions. Being able to manage Spotify, Play Music or others from your watch is a real comfort.

It is not yet clear if Google will choose to power your Pixel Watch with stock Wear OS (the basic, pure version of the operating system) or with an overlay stamped Pixel, offering a new interface and additional features. Pixel smartphones, for example, do not run on Android Stock, but with a Pixel launcher personalized by Google and specific to models in this range. 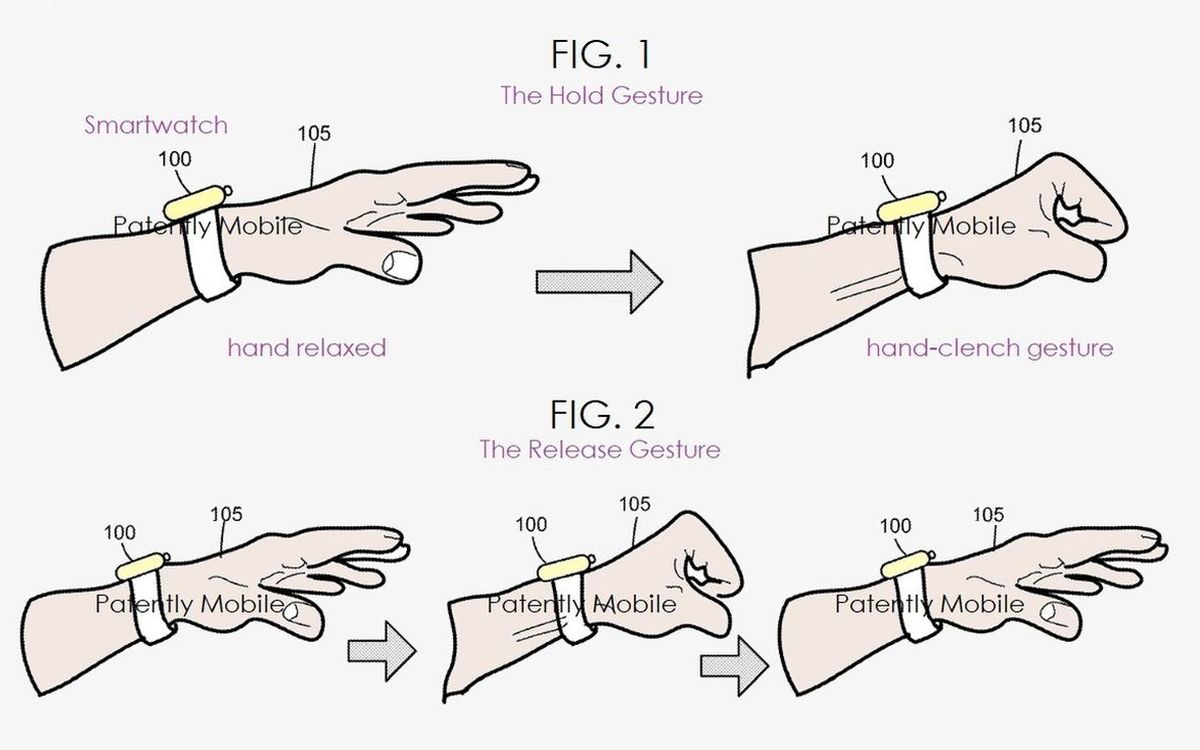 Google has filed a patent documenting a technology for control your connected watch with gestures rather than the touchscreen or Google Assistant. This would be the most convenient way to stay focused on your activity while using the features of your smartwatch. Imagine running and skipping to the next song with only a clenched fist, for example. The possibilities are enormous, especially if the controls are customizable.