“The left’s only chance is unity,” said Christiane Taubira, shortly after declaring herself a candidate for the presidential election, this Saturday, January 15. But on the left, precisely, this candidacy is not unanimous.

Anne Hidalgo (PS) is one of those who do not hide their disapproval. In an interview with the Sunday newspaper, the mayor of Paris, who claims to have “a lot of respect” for Christiane Taubira, wonders: “why is she a candidate, she who in December said she did not want to be another candidate?” .

Anne Hidalgo believes that the left did not “need” an additional candidacy. That of Christiane Taubira “will still separate, divide and create confusion”, she regrets. Charges that the interested party rejects, promising to submit to the citizens’ initiative of the popular primary.

Scheduled for the end of January, from 27 to 30, this vote must bring together voters from the left (120,000 registered) who will be responsible for “noting” the various candidates. The latter are seven in number, namely: Anne Hidalgo, Yannick Jadot, Jean-Luc Mélenchon, Christiane Taubira, Anna Agueb-Porterie, Pierre Larrouturou and Charlotte Marchandise.

Among them, some have already indicated that they would not recognize the result of this primary. This is the case of Jean-Luc Mélenchon, Yannick Jadot but also Anne Hidalgo, who had nevertheless herself proposed the organization of a primary. Today, the mayor of Paris affirms it: “No candidate will withdraw because he will have been badly classified! Me no more than the others”.

The first estimates suggest that Christiane Taubira is the favorite in this popular primary, since she has collected the most sponsorships. But her competitor, Anne Hidalgo, refuses to be impressed. 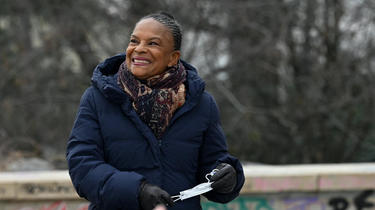 “The providential men and women, I don’t believe in them,” she says. Except in exceptional circumstances, like de Gaulle on June 17, 1940. But in today’s world that does not exist.