Does paracetamol cause abnormalities in children during pregnancy? 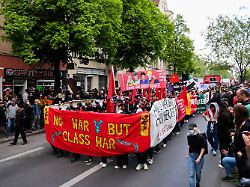 Thousands of people march through major German cities at the traditional demos on May 1st. The protests have been peaceful so far, only in Berlin does the police pay particular attention to one event.

Thousands of people took part in May Day demonstrations by left-wing groups across Germany. According to the police, 2,000 demonstrators marched through Hamburg’s HafenCity under the motto “We can no longer afford the rich”. In Berlin, particular attention was paid to the “Revolutionary May Day” demonstration from Neukölln to Kreuzberg. In the early evening, the police initially spoke of more than 3,000 participants, but more and more were being added.

Left and radical left groups had called for the protest. The police were in action with a large contingent. At the Kottbusser Tor in Kreuzberg, the windows of a future police station planned there, which the left-wing scene rejects, were protected with chipboard panels and bars. The police feared riots on the fringes of the protest march.

According to the police, around 200 people had already demonstrated there on Saturday against the guard planned for 2023. It had remained largely peaceful. In the past few decades, there have been repeated riots on the sidelines of May Day demonstrations in Berlin.

Until the early evening, several protests and demonstrations in the capital were mostly peaceful: around 10,000 cyclists, for example, drove through the affluent Grunewald in the west of the city, demonstrating for the redistribution of wealth. The satirical demonstration was held under the motto “Cripple Grunewald even more”. A poster read “Fair rent instead of profits”.

In Hamburg there were also no incidents until the early evening. The demonstration in Hafencity was accompanied by numerous police officers. In the evening, the “Black-Red May 1st” alliance wanted to take to the streets with 500 participants under the motto “Forbidden good – anarchism on the offensive”.

In the past, left-wing demonstrators had repeatedly engaged in violent clashes with the police in Hamburg’s Schanzenviertel around May 1st. After the serious riots surrounding the G20 summit in 2017, however, things had been rather quiet in recent years.