Walkabout Mini Golf launches its 20,000 leagues under the sea course

Foam rubber for handicrafts: It’s so easy to keep your children busy for hours

she reveals her sublime shapes in a tight sweater dress

Samsung is best known for its home appliances, televisions and smartphones. But, over the past few years, the tech giant has been churning out some fantastic laptops and Chromebooks.

For the past few weeks, I’ve been using and testing one of the company’s latest laptops, the Samsung Galaxy Book Odyssey. This punchy 15-inch laptop is for those who need a laptop that will allow them to both work and play.

Here are the specs of the Samsung Galaxy Book Odyssey I tested:

Samsung also offers models with more memory and storage. For example, you can double the memory to 16GB or increase it to 32GB, which automatically increases storage to 1TB. 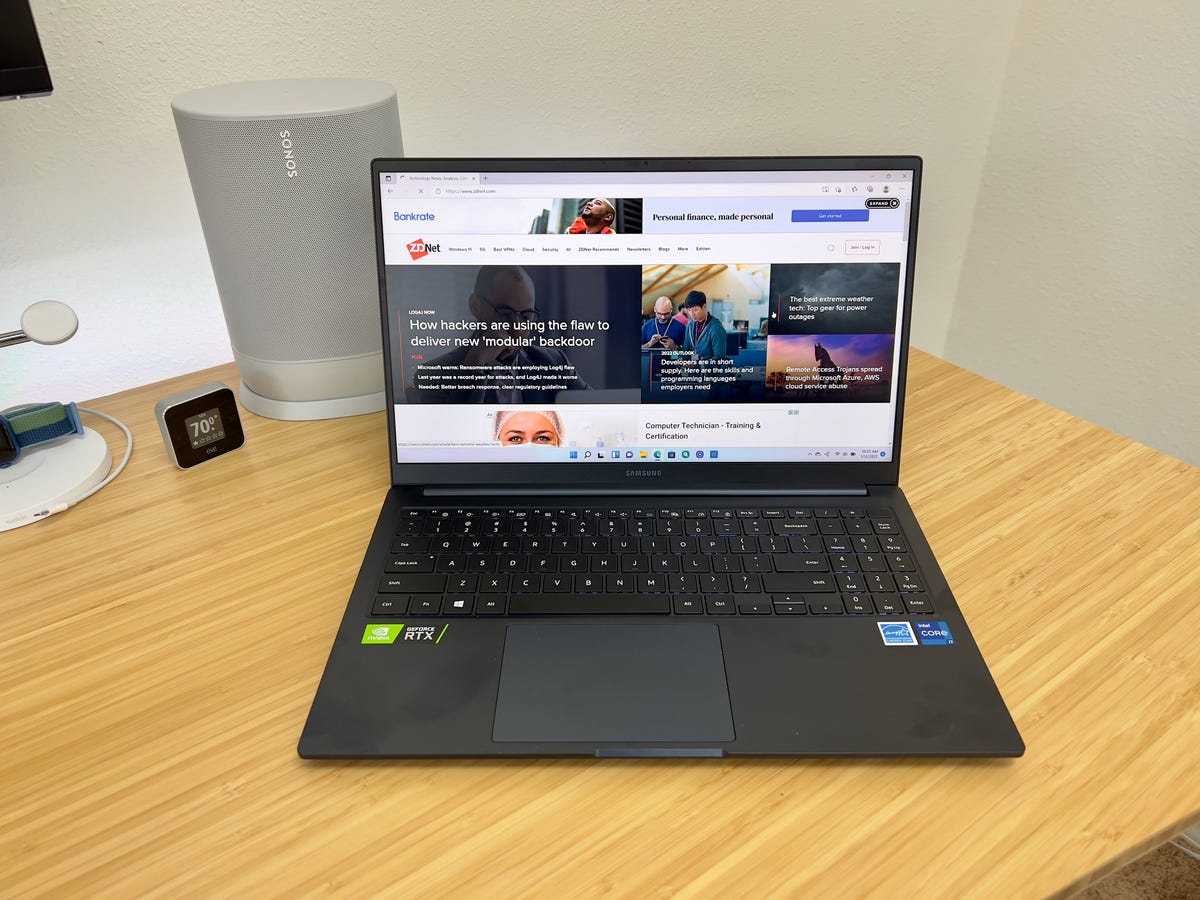 The Odyssey looks like a typical 15-inch laptop. Its black casing looks more like a very dark gray to my eyes. The lid is adorned with a silver Odyssey logo. When you open the lid, you’re greeted by a full-size keyboard with a miniature number pad on the right.

The power button is in the top right corner, and acts as a fingerprint reader to easily unlock the Odyssey or log into apps.

The vertical edges of the 15.6-inch FHD display are about half the size of the top edge, leaving room for the 720p webcam and microphones. The camera setup doesn’t work with Windows Hello face unlock, but the fingerprint sensor does a good job on its own.

The trackpad is off-center from the laptop case and keyboard, but it’s not misplaced. It sits just below the space bar and is always within reach. 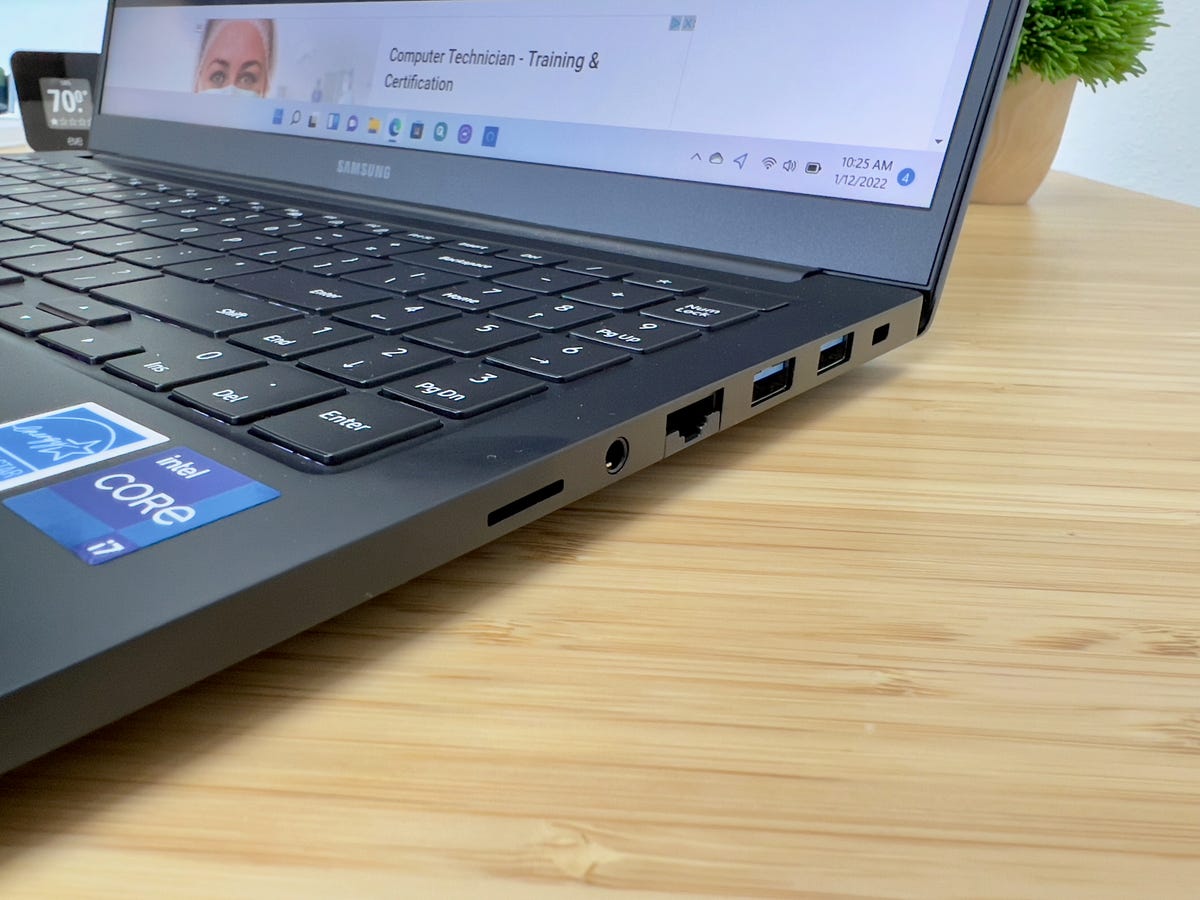 When it comes to ports, you’ll be hard-pressed not to find what you’re looking for on the Odyssey. On the right side of the deck are a microSD card reader, 3.5mm audio jack, collapsible Ethernet port, and two USB 3.2 ports. The left side of the case has a USB-C port, another USB 3.2 port, an HDMI port, and finally a second USB-C port which is also used to charge the Odyssey.

The Odyssey weighs just under 2kg and has a footprint of 35.5cm x 23cm x 1.8cm. It’s not an ultralight or super-portable device, but you should have no problem putting it in a backpack and carrying it around your campus, office, or home.

The Odyssey’s design isn’t impressive, but it doesn’t have to be. It’s a basic design with a premium feel that looks stylish. 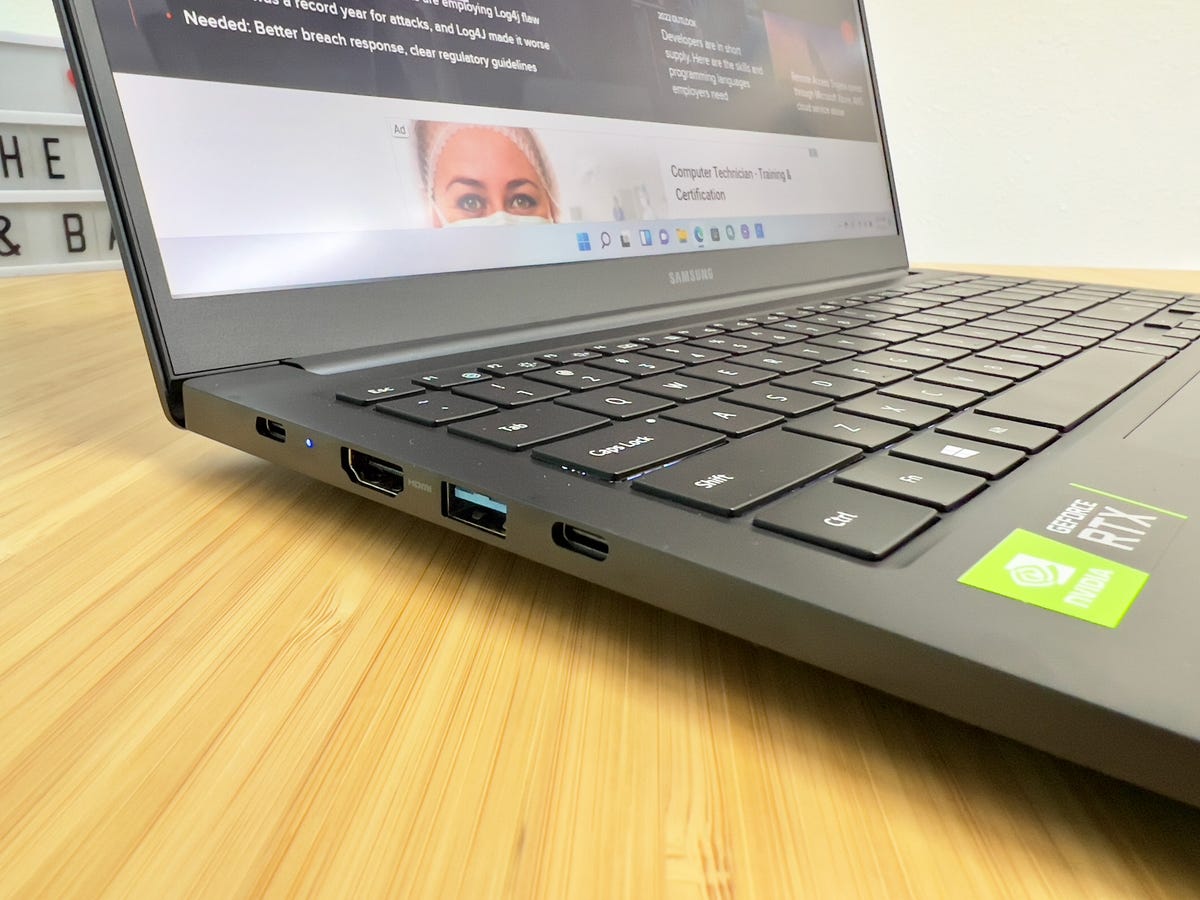 Inside the Odyssey is an Intel Core i7 processor, an RTX 3050Ti with Max-Q, 8GB of memory and 512GB of storage. It’s an interesting list of components, and with the addition of a beefier GPU like the RTX 3050Ti than you’d normally find in a gaming laptop. The Odyssey is built for work and a little play.

I’ve been testing the Odyssey for a few weeks now, using it for everyday tasks like watching YouTube, shopping on Amazon, and other random tasks. I also spent some time using it for work, checking email, responding to Slack messages, monitoring Twitter, writing, and occasionally editing photos. The Odyssey kept pace for all of these tasks without any hiccups or slowdowns.

I ran the PCMark 10 benchmark to give you a taste of the kind of performance you can expect from this particular model. With a respectable 5,698, the Odyssey’s benchmark score translates to a laptop that’s fast enough to keep up with your daily tasks and workflows. This reflects my experience.

Since the Odyssey is equipped with an RTX 3050Ti, it’s only natural to think that you can use it for gaming. And to a certain extent, it is possible. I installed Call of Duty: Warzone to see how far I could push the Odyssey’s gaming performance, and after tinkering with the graphics settings, I was able to get between 50 and 60 frames per second consistently. Where the GPU is really going to shine in a laptop like this isn’t necessarily in gaming with AAA titles, but rather in resource-intensive workflows like editing videos, photos, or even the use of CAD programs.

That said, you can still get away with it if you play occasionally. Just set appropriate expectations and know what you will get in terms of performance.

I enjoyed typing on the keyboard, although I could do without the small number pad on the right side of the keyboard. It’s too narrow for my taste.

I didn’t buy into the trackpad: either it’s way too sensitive, or it’s not sensitive enough, when I type and swipe through apps and the interface. I tried to adjust the sensitivity settings, without success.

Another aspect of the Odyssey that I found lacking is the screen itself. It’s a full high-definition display with 1080p resolution, and that aspect is just fine. But the lack of brightness and color saturation leaves me wanting more. Samsung is known for the bright and vivid display panels it produces for TVs, monitors, phones, and tablets. I expected the same from the Odyssey.

Samsung claims you should get up to 12 hours of use from a single charge. I ran PCMark 10’s Modern Office battery life test which simulates a normal working day, combining image editing, browsing and the occasional video. I turned off Bluetooth, keyboard backlight and set screen brightness to 50%. The Odyssey lasted 5 hours and 31 minutes in this test. My personal use lasted longer than this benchmark result, with enough power to last a typical workday.

I don’t normally spend a lot of time talking about Windows laptop software because, well, it’s a Windows laptop. However, Samsung laptops take a slightly different approach to software, as Samsung has several of its own apps that come pre-installed on its laptops.

Some of these apps, like the ones I just mentioned, as well as Samsung Updates, Gallery, or Notes, make sense to me. Each of them provides a useful service or access to files, photos or videos that are also stored on your smartphone. But the list of preinstalled Samsung apps is long and bordering on excess. For example, Bixby is installed. I don’t know anyone who uses Bixby on a smartphone, and it doesn’t make sense to have Samsung’s virtual assistant on a laptop. Alexa is also pre-installed on the Odyssey. The same goes for Live Message and Live Wallpaper. These two apps are not really necessary on a laptop.

Samsung is heavy-handed about pushing its apps and services across all of its devices, so it’s no surprise that a Windows 11 device has the same issues — I just wish it didn’t.

Apart from Samsung’s own apps, there is one app we need to talk about: McAfee antivirus. It’s bloatware and it’s incredibly annoying to deal with prompts asking to scan a file, folder, or make sure virus scanning is active. Luckily, you can remove McAfee with just a few clicks, but I wish users didn’t have to worry about that.