Election posters on a pension reform, September 23, 2022 in a street in Geneva, Switzerland, two days before a vote (AFP / Fabrice COFFRINI)

The Swiss narrowly voted in favor of raising the retirement age for women to 65, according to projections published by the gsf.bern institute and other media.

On the other hand, another popular initiative scrutinized abroad, which tried to ban intensive farming, was largely rejected, with 63% of the votes against.

After two failed attempts in 2004 and 2017, Bern should therefore collect enough votes to “stabilize” the Swiss old-age insurance system, which is under enormous pressure as life expectancy increases and the baby boomer generation reaches the age of leaving working life.

The most controversial part of the reform requires that, like men, women work until they are 65, before they can claim a full pension. A year older than now. 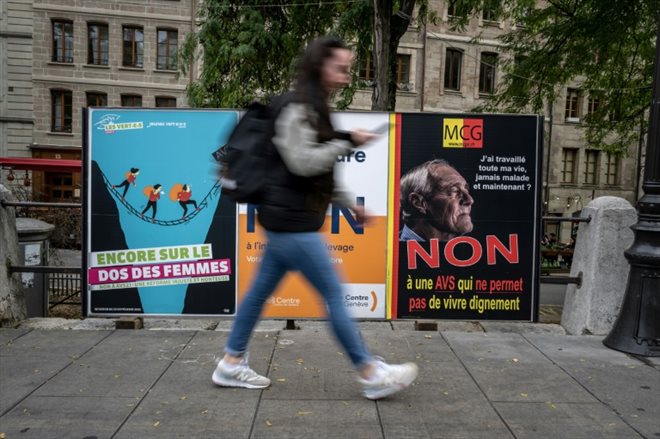 Election posters on a pension reform, September 23, 2022 in a street in Geneva, Switzerland, two days before a vote (AFP / Fabrice COFFRINI)

Parliament approved key pension reform measures last year, which also include a VAT hike (passed to 56% on Sunday), but left-wing parties and unions have denounced a reform “on the backs of the women” and forced the referendum.

The outcome of the ballot “is painful for the left and the unions, but above all for the people concerned”, said Samuel Bendahan, PS national councilor, on public television RTS.

Opponents of the reform had pointed to the wage discrimination that continues to plague women and believe it is unfair to raise the retirement age for them without first addressing these inequalities.

Yes supporters have pointed out that asking women to work an extra year is not unreasonable in view of economic and demographic data. 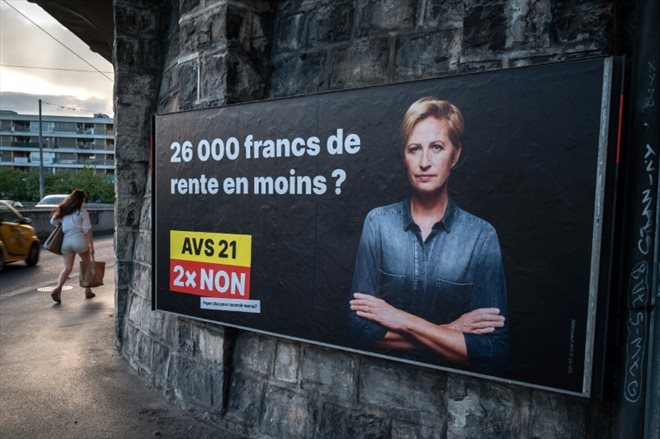 An electoral poster on a pension reform, September 23, 2022 in a street in Geneva, Switzerland, two days before a vote (AFP / Fabrice COFFRINI)

In 2020, women in Switzerland received on average almost 35% lower pensions than their male counterparts, according to the Swiss economy ministry.

The proposal to ban intensive farming, which would have essentially eradicated industrial farms in a country which is still very rural even if agriculture weighs relatively little in the national wealth, was rejected by a final vote. 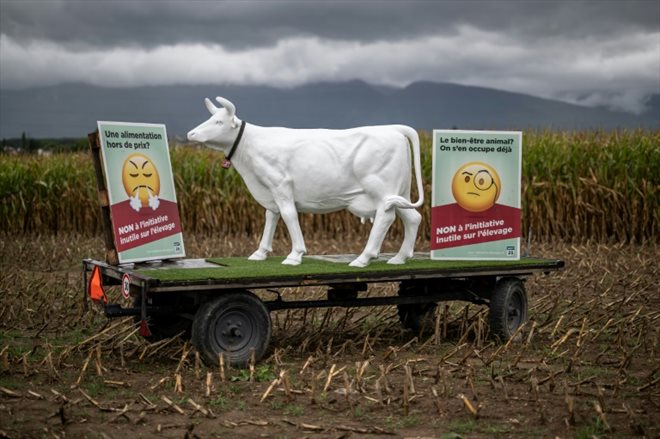 Posters against intensive farming in a field near Collex-Bossy, Switzerland, September 15, 2022 (AFP/Archives/Fabrice COFFRINI)

The Swiss felt that the welfare of farm animals was already respected in the Alpine country.

The government, parliament and representative herders’ organizations were strongly opposed to the initiative.

According to current laws, farms cannot keep more than 1,500 fattening pigs, 27,000 broilers or 300 calves, which excludes the gigantic factory farms found in other countries.

A poster against intensive farming in a field near Bioley-Orjulaz, Switzerland, September 17, 2022 (AFP/Archives/Fabrice COFFRINI)

Bern had also warned that these new rules would lead to a significant increase in prices, while the import clause could have an impact on relations with trading partners.