These threats that nuclear power has posed to the world

The G7 countries meeting at the summit in Germany want to further tighten the economic vice around Russia, by reflecting on a “mechanism to cap the price of Russian oil at the global level”, according to the White House, which promises to be complex .

“There is an emerging consensus (…) that this is a serious method” between the heads of state and government gathered in the Bavarian Alps, in southern Germany, said Monday the principal diplomatic adviser to the American president, Jake Sullivan.

However, he acknowledged, in front of the journalists accompanying Joe Biden, that “the discussions continued”. The summit is due to end on Tuesday.

An agreement by the G7 members on this subject would be “a fairly spectacular step forward” and “one of the most significant results” of the meeting, said Jake Sullivan.

He assured that the difficulty of the discussions was not due to fundamental disagreements, but to the complexity of the project.

“It’s not something we can pull out of our drawers as if it were a tried and tested method…it’s a new concept,” he acknowledged.

“Leaders cannot decide every detail here,” said Jake Sullivan, referring to “instructions” from heads of state and government to their ministers to develop such a project.

France said it was in favor of this proposal and even considers it necessary to extend it to gas and to all market players, while admitting that the instructions for use of such a tool are “quite uncertain”.

Ukrainian President Volodymyr Zelensky also asked the G7 on Monday to strengthen sanctions against Russia “by limiting the price of oil” exported by Moscow.

A cap would go through the “services” surrounding the export of Russian oil, said a senior US executive.

This term “services” may refer in particular to transport by ship and to insurance contracts on shipments of Russian black gold.

Since Russia’s invasion of Ukraine on February 24, the question of how to sanction Russian hydrocarbons has been one of the thorniest for Westerners. 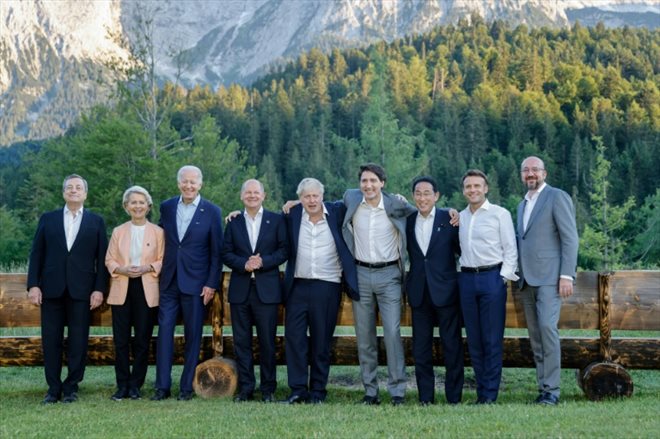 The leaders of the G7 want to avoid further inflating the price of black gold, and thus fueling price inflation at the pump which weighs heavily on their populations.

Moscow can find other outlets – China and India among others have already shown their appetite for its oil.

After tough negotiations, the European Union finally decided to ban most Russian oil within six months.

The United States, which is in a very different situation since it is itself a major producer, had already done so.

Americans and Europeans also promised on Monday, in a joint statement by Joe Biden and the President of the European Commission Ursula von der Leyen, to continue their efforts to help the European Union wean itself off Russian gas, of which it is very dependent.

This approach involves in particular liquefied natural gas, as an alternative to that delivered by Russia by gas pipelines, and which Moscow “uses as a weapon”, according to the press release in question. 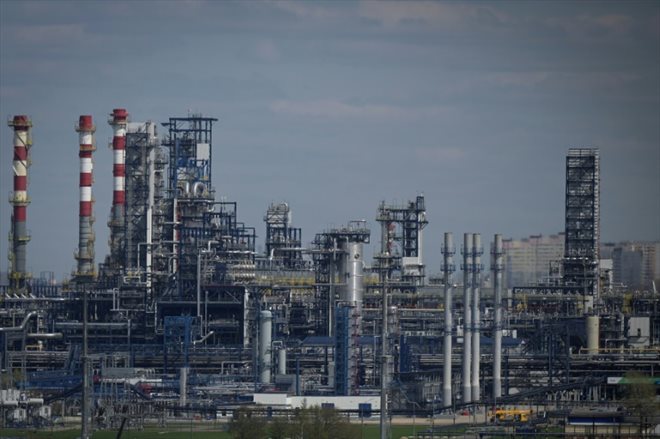 An oil refinery of the giant Gazprom Neft, on the outskirts of Moscow on April 28, 2022 (AFP/Archives/Natalia KOLESNIKOVA)

Germany, for example, had to take emergency measures to secure its supply in the face of recent drops in gas deliveries by the Russian group Gazprom, which also reduced its deliveries to Italy.