War in Ukraine, energy prices… What is the outcome of the G7 summit?

Covid-19: justice finds the State at fault for not having stored enough masks before the epidemic

Deck13 is therefore launching into publishing with this first title developed by a very young studio. Better still, the German company – owned by Focus – has decided to invest in this young shoot by acquiring a 30% stake in the studio.

Behind its small RPG look without much means, Drova: Forsaken Kin seems to hide serious ambitions. In any case, this is what the official presentation of the title promises, describing a dark universe in which a dark society has got hold of an ancestral knowledge: that of controlling the spirits of nature. In a world torn between several factions, we will embody an adventurer who will have to take sides and therefore actions will have, we are promised, a decisive impact on the world. Drova will also take advantage of letting the player trace his own path in this universe, without helping him with any quest markers or even a map. Only his curiosity and his thirst for discovery will guide his steps. 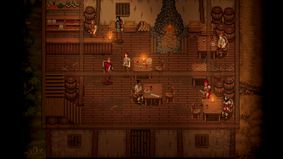 Our adventurer will also have the opportunity to capture nature spirits himself to absorb their powers, but at his own risk. Because, in doing so, he will somehow take sides against them and will have to suffer the consequences.

In the same way, he will be allowed to learn new skills from certain NPCs and thus to establish relationships which may also cost him something. Just2D thus promises that our actions in game will have an impact on our positioning on the chessboard of the world.