Huawei, technological partner of Avatr Technology on the electric vehicle

Apple: the SSD of the MacBook Pro M2 disappoints compared to the M1 model, but why?

July’s free Xbox games won’t have you jumping out of your seat, except Torchlight

Samsung Galaxy, iPhone, Xiaomi: up to €100 discount at Bouygues Telecom

“The Walking Dead” season 11 also introduces a lot of new protagonists with the Commonwealth. That includes Sebastian Milton (Teo Rapp-Olsson), who is at his worst in episode 10… if he has any good ones at all.

Sebastian Milton is the son of Commonwealth Governor Pamela Milton. The young man takes full advantage of his privileged situation. For example, he has the weapons of the newcomers handed to him in order to choose the best pieces. All he cares about is his image. He constantly wants to prove himself, especially in front of his powerful mother.

Anyone daring to make him look weak risks having to confront the Commonwealth military. Because his commander Mercer is also Sebastian’s personal bodyguard. When Daryl saves Sebastian from a “rotten one” who threatens to overpower him, Sebastian reacts with anger because his mother witnessed the scene.

To make amends for this faux pas pointed out by Mercer, Daryl later lets Sebastian take away Tyler, the ex-soldier who threatened Pamela’s assistant, Max. Sebastian celebrates his arrest.

The unpleasant character of Sebastian will become even clearer in the coming episodes. If you want to know what the comics already reveal about spoiled Sebastian, read on. But beware, spoilers follow.

This is what the comics reveal about Sebastian Milton

Sebastian Milton is the final antagonist of the comic books. Throughout the course of the story, he proves again and again what a spoiled, lazy and self-absorbed person he is. This does not change when there is a revolution in the Commonwealth that turns against the class society of the Miltons.

Rick even tries to save him and Pamela, fearing the angry Commonwealth will make short work of them. The Miltons flee to Greenville, only to return with an army shortly thereafter.

Pamela Milton accuses Rick of conspiring with Mercer just to overthrow and get rid of her. She orders the army to attack, but Rick defuses the situation. He calls on the population to vote democratically on whether Pamela Milton remains in office. Pamela loses the election and is arrested by Mercer and taken to prison.

That night, Rick is awakened from his sleep. Sebastian stands in front of him with a gun. Rick is unable to reason with him and is shot by Sebastian. A few days later, Sebastian is caught. Carl sentences him to life imprisonment because Sebastian only pretends to regret his actions. But he regrets much more that he was caught.

The Walking Dead Quiz: Are you ready for the zombies?

What was Beta’s job in his previous life? 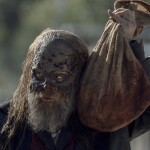 Of course, Rick and Carl are no longer in the AMC series. However, we assume that the story around Sebastian will be similar and other characters will follow in the footsteps of Rick and Carl. A good candidate would be Maggie, who has taken the lead over Alexandria in the series. Her son Hershel is significantly younger than Carl, but Daryl could also be the one to take on Sebastian on the show.

On March 7, 2022 we will find out how the 11th season of “The Walking Dead” will continue. Episode 11 will deal with the disappearance of Stephanie. So the mystery surrounding Stephanie deepens. You can see the new episodes in the stream on Disney + or on TV at ProSieben Fun.