The United States on Friday unveiled its new stealth strategic bomber, the B-21 “Raider”, a device capable of being operated without a crew and carrying out long-range nuclear strikes, as well as using conventional weapons. .

The plane was presented in Palmdale, California at one of the sites of its manufacturer, Northrop Grumman, during a skillfully choreographed ceremony, opened by the American anthem.

With great reinforcements of projectors and dramatic music, the industrialist lifted the veil on this new high-tech plane, of which the Pentagon plans to buy at least 100 copies, at nearly 700 million dollars each.

“The B-21 +Raider+ is the premier strategic bomber in over three decades,” Defense Secretary Lloyd Austin said. A sign according to him that the United States continues to show “ingenuity and innovation”.

The American army does not wish to reveal too much information on the capabilities of the B-21, many of whose technical characteristics remain secret. But this new model, which should gradually replace the B-1 and B-2 bombers – whose first take-offs date back to the Cold War – should present significant advances compared to the existing fleet.

The new aircraft has “a range that no other long-range bomber can match,” Austin said, also assuring that the aircraft is one of the most durable bombers ever created.

Like most recent US military designs, including the F-22 and F-35 fighter jets, the B-21 will be stealthy.

“Even the most sophisticated air defense systems will have difficulty detecting the B-21 in the sky,” Mr. Austin assured, explaining that the plane benefits from 50 years of American know-how in the field.

The plane also has an “open architecture” which should allow it to easily accommodate “new weapons that have not yet been invented”, he added.

The bomber is “designed to evolve”, commented Amy Nelson, an expert at the Brookings Institution, an American think tank based in Washington.

Its “open architecture” allows in particular “the future integration of software” capable of improving its performance, in particular its autonomy, “so that the aircraft does not become obsolete quickly.” 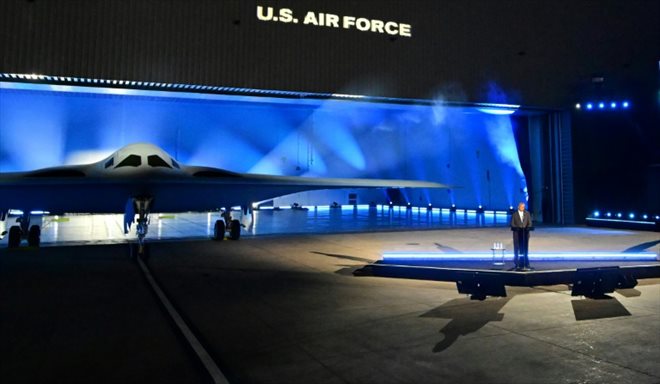 US Secretary of Defense Lloyd Austin, during the presentation of the B-21 “Raider” bomber, unveiled in Palmdale, California, on December 2, 2022 (AFP/Frederic J. BROWN)

“The B-21 is much more polished than its predecessors, really modern,” she added. Unlike the B-2 bomber, the aircraft has a “dual capability”: it can strike with both nuclear missiles and conventional weapons. But it can also “launch long and short range missiles.”

This state-of-the-art bomber can also fly without any crew on board, a feature that was not mentioned during its presentation in Palmdale.

An air force spokeswoman confirmed to AFP that the plane “plans for this possibility, but no decision has been made to fly without a crew”.

The first flight of the B-21, of which Northrop Grumman is already working on the first six copies, should take place in 2023.

Its nickname, “Raider”, is inspired by the raid led by Colonel James Doolittle to bomb Tokyo in 1942, the first American strike on Japanese soil during World War II, in retaliation for the attack by Japanese aircraft on the Pearl Harbor base in Hawaii a year earlier.

The B-21 is to become a key part of the American “nuclear triad”, made up of missiles and bombs that can be launched from land, sea or air.

“The bomber fleet allows the United States to be flexible in terms of nuclear deterrence and offers a guarantee in the event of problems with the other pillars” of this strike force, concludes expert Amy Nelson.