Siemens: shore power installation at the Port of Kiel

Bonduelle enters into exclusive negotiations with the Fonds de solidarité FTQ and the Caisse de dépôt et placement du Québec for the sale of 65% of Bonduelle Americas Long Life – 05/24/2022 at 6:15 pm

We have to act,” Biden said after the Texas massacre, without offering details.

The Difference Between Correlation and Beta

Emmanuel Macron addressed parliamentarians on Friday to take stock of the situation in Ukraine and the sanctions applied against Russia. The Head of State’s text was read in the National Assembly by Richard Ferrand, and in the Senate by Gérard Larcher.

In the preamble, the President of the Republic made a point of addressing a “first thought to the Ukrainian people”.

“I salute the courage Ukrainians are showing in resisting Russia’s massive military offensives, as well as their determination to defend their sovereignty and freedom,” he said.

As a “permanent member of the United Nations Security Council”, “president in office of the Council of the European Union”, Emmanuel Macron indicated that France’s duty was “triple”.

At the Assembly, through the voice of Richard Ferrand therefore, Emmanuel Macron announced to the parliamentarians that the European Council had acted, Thursday evening, “a series of unprecedented sanctions affecting Russia and Belarus”.

These sanctions also concern “Russian personalities, including “the highest leaders of the Russian Federation”.

In order to support Ukraine against the invasion of Russia, Emmanuel Macron had indicated, at the end of a summit of the European Union in Brussels that the EU would provide aid of 1.2 billion euros , including 300 million from France.

“We must ensure unity”

Emmanuel Macron also recalled that it was essential “to ensure unity with our allies” in order to “protect our sovereignty, our security and our democracy”. 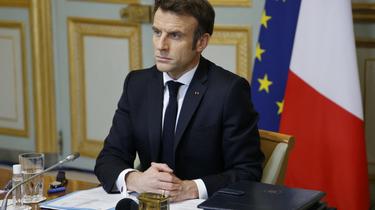 As a result, the Head of State took the decision to strengthen “the fight against the manipulation of information and cyberattacks”, which could be committed by “foreign interference”.

If he recognized that these sanctions against Russia would have long-term consequences, “including against France”, Emmanuel Macron indicated that they should however be “assumed”.