Victory against France – from 0: 2 to 5: 2: Switzerland remains flawless at the World Cup – sport

THE COMPOSITION OF ELISABETH BORNE’S GOVERNMENT WILL BE ANNOUNCED AT 4.15 PM

Northern Ireland: London calls on the EU to resolve the impasse

Google Docs and Sheets: 5 tips to improve your productivity As a reminder, the term “metaverse” is a contraction of the words “meta” (which refers to an overall vision) and “verses” for “universe”. The word refers to digital spaces much more advanced than virtual reality (VR) or augmented reality. It’s about extending our reality into shared virtual spaces, which are modeled in a 3D environment. The basic idea of ​​the metaverse is not complicated. Simply put, the metaverse includes any digital experience on the Internet that is persistent, immersive, three-dimensional, and virtual. If the rebranding of Facebook in Meta automatically comes to mind when we talk about this new universe, Chinese companies and local governments of the country are working to counter-attack the American offensive.

The municipal authorities of the cities of Wuhan and Hefei have both committed to boosting the dynamics of the metaverse over the next few years. For Wuhan, the desire is to integrate the metaverse, big data, cloud computing and blockchain into the “real economy”, while for its part Hefei declared that it would favor companies in “advanced fields”. including the metaverse. As we will see below, a number of tech companies in China want to get into this universe while at the same time, state media outlets are blowing on the fire to calm speculation. closely or remotely linked to the metaverse.

“Everyone needs to stay rational to understand the current metaverse mania,” People’s Daily, the spokesman of the Communist Party. Other newspapers, including the Economic Daily, managed by the state, warned against speculative transactions in the sector. The incentive is to avoid hastily investing in the “immature” concept like the metaverse.

Despite these caveats, other cities are also developing metaverse initiatives. Probably to attract new companies in the field. Zhangjiajie in Hunan Province has launched a metaverse-based research center to help the city develop its tourism industry. Shanghai said that in the next five years, it will strengthen R&D of technologies underlying the metaverse, especially for commercial and industrial applications. Finally, it is the city of Hangzhou, which is home to the headquarters of the e-commerce giant Alibaba, which is said to have set up a “metaverse committee” which would be made up of business representatives and academics.

If Chinese cities are embarking on this new virtual world, as you can imagine, companies also do not intend to be left behind.

Let’s start with the gaming and entertainment industry giant Tencent. Obviously the Chinese company cannot afford to let its American competitors get a head start on a potentially revolutionary technology. It should be noted that the company still has a foothold on the American continent by owning 40% of the video game development studio: Epic Games and it has also signed a strategic partnership with Roblox, a platform that allows users to create virtual worlds. Tencent CEO Ma Huateng told numerous analysts at a conference that:

“The meta-universe is an exciting thing, but it’s also a conceptual thing. We’re at a relatively high stage to look at the metaverse, which is about making the virtual world more real and the real world richer. Tencent has several technical modules, including the basis of interaction and social media, AI and the ability to create a community game platform, can create a metaverse like building blocks”.

Tencent also owns the super social networking application WeChat which allows you to chat, shop, order food, or even book a taxi. An essential application for the billion Chinese. If Tencent is preparing a sensational entry into the metaverse behind the scenes, it could, thanks to its sprawling commercial empire, be one of the players promoting the mass adoption of this new universe. In this sense, Tencent filed last September a registration application for a hundred trademarks related to the metaverse, including “QQ metaverse”, “QQ Music metaverse” or “Kings metaverse”.

The Chinese group presented last month a parallel universe entitled Xi Rang (“Land of hope” in French). As the ambition of the various metaverses, the platform proposed by the boss of the group, Robin Li, will allow its users to interact with other individuals evolving in this Land of Hope. Playing, having fun, learning, shopping, displaying advertisements, attending conferences are all activities that the company says will be possible in the metaverse.

There is still a lot of work to do to offer users a quality metaverse experience. Fluid, intuitive and ergonomic navigation will have to be put in place for mass adoption to explode. But we will have to take our troubles patiently before seeing an operational platform, since Baidu estimates that it will take at least six years before it can come up with an optimal solution. The virtual world is available on several media: AR/VR headset, computer, smartphone, which will help reach a large user base. For the moment the company has not communicated on the economic model that will be applied for the metaverse. Case to follow in the coming months.

In late summer 2021, the Chinese company acquired VR software and hardware maker Pico. It was founded in 2015 by Zhou Hongwei, who previously served as vice president of Goertek (Meta’s exclusive Oculus foundry). In other words, Mr. Hongwei has the bottle, or should I say, the helmet. Pico holds over 300 patents covering core virtual reality technology areas such as imaging, optics, acoustics, hardware design, and spatial positioning among others.

ByteDance, which owns the popular app TikTok, intends to absorb these technologies in hopes of one day being able to offer augmented reality-based resources to its user base. But that’s not all. ByteDance has invested 100 million yuan in Qiankun, a Metaverse concept mobile game developer. A kind of Roblox with Chinese sauce. ByteDance seems to fit into the Metaverse samba.

The Chinese e-commerce giant recently registered a new company named Yuanjing Shengsheng in Beijing to explore the possibilities of “gaming-metaverse”. Additionally, the company registered the Chinese version of “Ali Metaverse” trademarks, “ Taobao Metaverse” and “DingDing Metaverse”. With these different initiatives, Jack Ma probably has several ideas in mind to compete with American Big Tech and their metaverse projects.

NetEase: an island dedicated to the metaverse

The Chinese company is one of the leaders in the development and publishing of video games. Inevitably, NetEase must be part of the metaverse trend, and to do this, it does not skimp on the means. It signed a strategic cooperation agreement with the municipal government of Sanya last month. This agreement plans to set up the company’s headquarters in Hainan and build an industrial base project based on the metaverse in the capital of the southern island province of Sanya.

As part of the deal, NetEase noted that it has “full reserves in metaverse-related technology, talent, and regulation.” For example, NetEase has advanced technical capabilities in areas such as Virtual Reality/Augmented Reality, Artificial Intelligence, Robotics, Cloud Gaming, and Blockchain. The tech giant has also implemented metaverse concept products such as the immersive “Yaotai” system, an AI virtual host and “planet blockchain”, a blockchain-based value-sharing platform.. If a China-verse emerges, the company will most likely be among the leading players in the field.

While the Chinese state has been quick to pour some cold water on metaverse initiatives by warning of “undesirability” and “hot speculation” about this new universe, companies across the country throw themselves headlong into this virtual world: 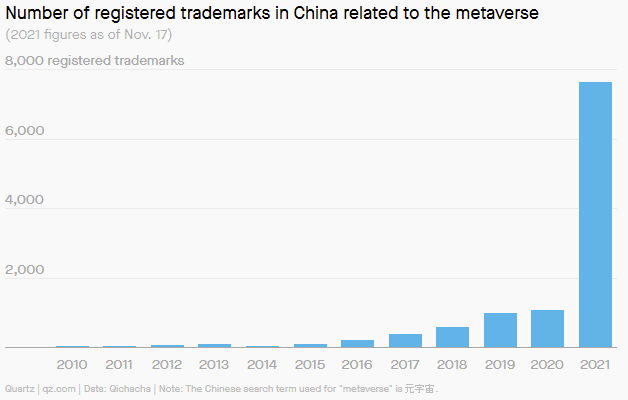 Number of trademarks registered in China linked to the metaverse
Source: Quartz.com

The only catch for these companies is that the Chinese government may not share Zuckerberg’s enthusiasm for the prospect of an immersive, real-time universe of virtual worlds.

In recent months, Xi Jinping’s government has taken a series of measures to try to reduce the role of social media and the internet in the lives of Chinese citizens. The national video games regulator recently tightened its already strict rules, requiring anyone under the age of 18 to be allowed to play online games for only one hour per night between Friday and Sunday. We can see a sort of contradiction between private initiatives and the will of the government. On the one hand, companies that are developing 100% digital solutions in an immersive virtual world, and on the other, a government that wishes to limit the exposure of individuals to digital content.

At the same time, China is one of the most advanced countries in the development of digital central bank currencies (MNBC). For exemple, as of June 30, 2021, nearly 70 million wallets had been opened with which more than 70 million transactions were carried out with a value of 35 billion yuan (about 5.3 billion dollars). Four months later, the number of digital wallets has doubled and the value of transactions is approaching $10 billion. It is therefore now possible for the Chinese to be able to transform their paper yuan into e-yuan. A much more important development than in the United States, which still raises the question of the real necessity and usefulness of setting up an MNBC.

Ultimately, Chinese companies have nothing to be ashamed of in the face of American metaverse initiatives. Tencent, Baidu, NetEase, ByteDance, Alibaba, among others, have all the skills, technologies and, it is clear, the ambition to develop metaverse solutions. The big question mark comes from the Chinese state, which seems to be taking tweezers, and even putting a beating in the wheels of these companies to throw themselves body and soul into this digital world. Even if local governments, as we have seen, also seem to be on the same wavelength as private companies, we are not immune to a blow from the state in the metaverse anthill. Chinese. This would allow American companies to have free rein. The misfortune of some is the happiness of others…

Count on me to carry out regular focus on Chinese and American companies and our European nuggets regarding progress on the metaverse. Who knows, maybe in the near future I will offer you interactive articles in the Zonebourse metaverse. A kind of immersive collaboration.