The coffin containing the remains of “King” Pelé walked the streets of Santos, in the south-east of Brazil, on Tuesday in a funeral procession greeted by the crowd before arriving at the cemetery, at the end of the vigil which attracted more than 230,000 fans to the stadium of the Brazilian footballer’s first exploits. The black coffin, which had remained open and covered with a veil of tulle, revealing only the face of the deceased, was closed at 10 a.m. (1 p.m. GMT).

The procession’s final destination is the final resting place of the “King” of football, a mausoleum within the largest vertical cemetery in the world, a 14-storey building with a view of the stadium of Santos FC, the club where the triple world champion shone from 1956 to 1974.

Throughout the funeral wake, which lasted 24 hours, the parade of fans and personalities continued uninterrupted, including during the night, and more than 230,000 people gathered under the large canopy where the remains of Pelé had been exposed, in the center of the field. The coffin was taken out of the stadium in a cart, the driver of which was crying bitterly. It was then hoisted on top of a fire truck, then covered with two flags: that of Brazil and that of Santos FC.

The procession left the stadium for a 7 km course towards the seaside of Santos, a seaside resort and the largest port in South America. He then had to pass the house of Pelé’s mother, Celeste Arantes. Aged 100 but suffering from cognitive impairment, she is unaware of the death of her son. All along the route, a guard of honor of supporters applauded the passage of the fire truck. Some sang: “1,000 goals, it’s only Pelé, and he played for Santos!”.

Lula offers his condolences to the widow of Pelé

The legendary Brazilian scored 1,091 of his 1,283 goals in the white and black jersey of this legendary club. “He was the greatest player in the world, so it’s worth being here,” Maria Benedita, a 77-year-old retiree, told AFP, very moved by the fire truck. An hour before the departure of the procession, Brazilian President Luiz Inacio Lula da Silva came specially to Santos from Brasilia to collect himself in front of the remains of Pelé.

Arrived near the stadium by helicopter, Lula, who took office on Sunday, immediately offered his condolences to Pelé’s widow. 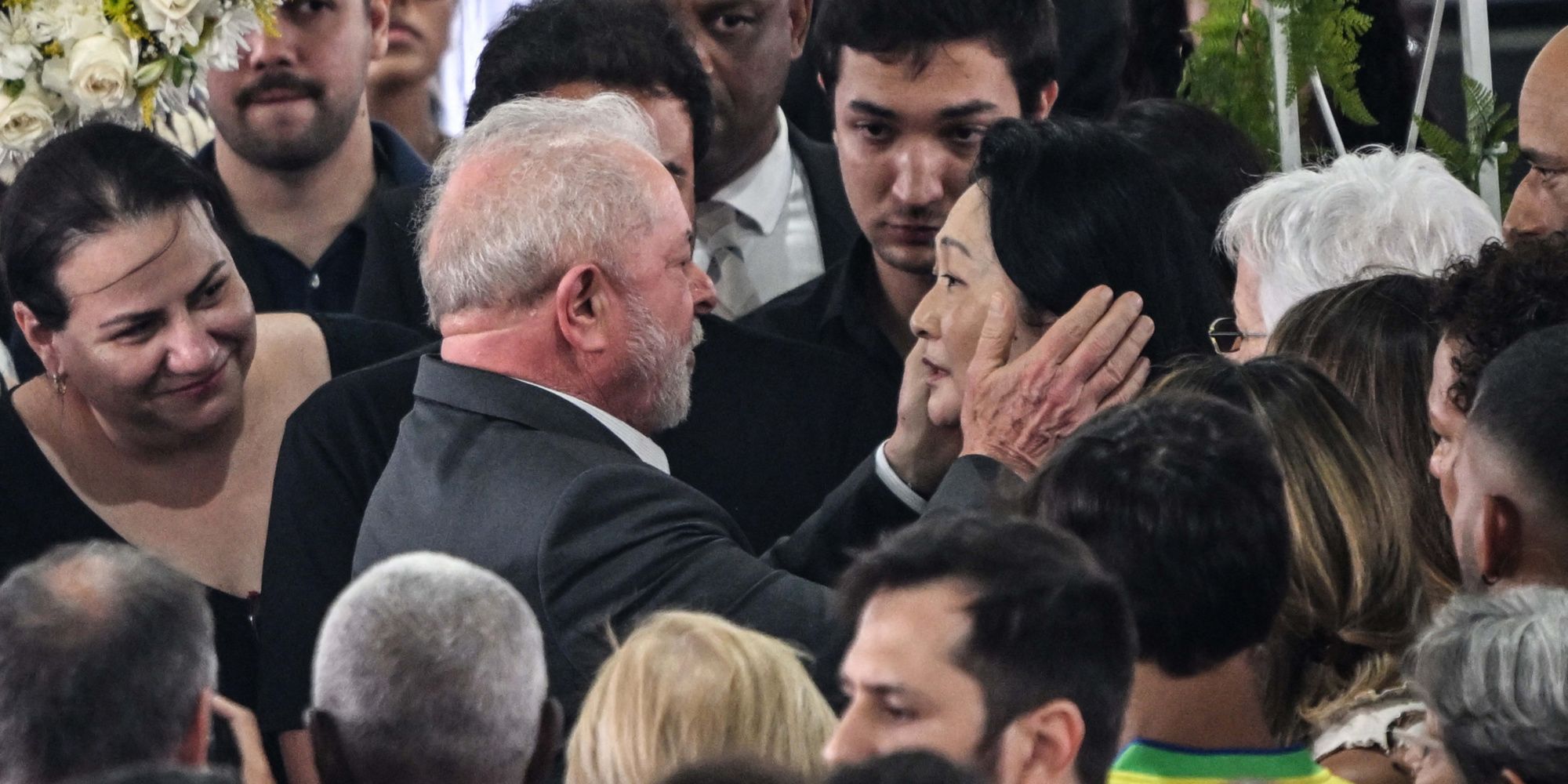 President Lula offered his condolences to the widow of footballer Pelé.
Credits: AFP

The Head of State attended a brief religious ceremony near the coffin, during which the priest quoted an imaginary dialogue in Heaven between Pelé and God, who would have said to him: “Here you are still King, but I am the Lord”. “Farewell to the King. Rest in peace, Pelé,” Lula tweeted afterwards.

After waiting for the most part in long queues, admirers of Pelé from all over Brazil have been able to gather in peace under the large awning since Monday morning. “If I said that I did not cry when he died, I would be lying,” he told AFP Antonio Carlos Pereira da Silva, about the one who many consider the greatest footballer in the world. history, the only one to have won the World Cup three times in 1958, 1962 and 1970.

“There are many, many people. It’s magnificent, he deserves it,” Katia Cruz, 58, a retired Santos FC fan, who stayed at the stadium until 1:30 a.m., told AFP. But her husband, “inconsolable”, preferred to stay at home.

Tributes have poured in from around the world since his death, with football’s biggest names, current and former, hailing his genius for the “beautiful game”. Edson Arantes do Nascimento, known as Pelé, spent a month in Albert Einstein Hospital in Sao Paulo until his death on Thursday at age 82 from kidney and heart failure, bronchopneumonia and adenocarcinoma of the colon, according to the death certificate published by local media.