Pope Francis signed a pact on Saturday in Assisi, in central Italy, with young people from all over the world aimed at building “an economy of peace and not of war”, noted AFP journalists.

In this pact signed by about a thousand young people from a hundred countries to participate in a three-day meeting entitled “The Economy of Francesco”, they undertake to build an economy “at the service of the person, the families and life, respectful of every woman, man, child, elderly person and especially the most fragile and vulnerable”. 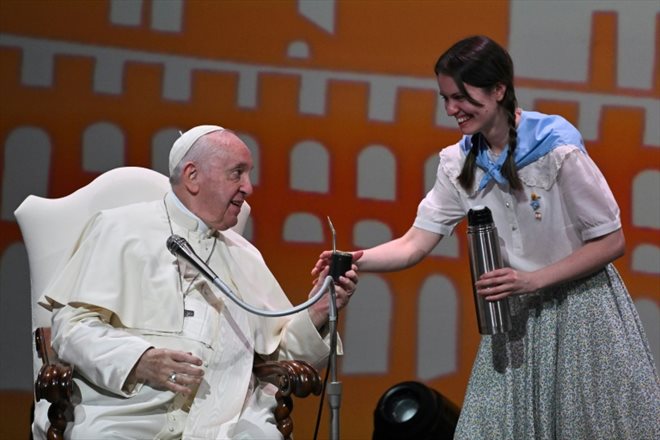 Pope Francis accepts a mate during the signing of the “Pact for a New Economy” in Assisi, central Italy, on September 24, 2022 (AFP/Tiziana FABI)

These young people, economists, students, entrepreneurs and workers also want “an economy that fights poverty in all its forms (…) that creates wealth for all”, according to a Vatican press release.

“Our generation has bequeathed you many riches, but we have failed to preserve the planet and we are not preserving peace. You are called to become artisans and builders of the common house, a common house that is falling apart “, Pope Francis told the young people before the signing of this pact.

“A new economy, inspired by Francis of Assisi, can and must today be an economy respectful of the land and an economy of peace,” he added.

“The situation is such that we cannot wait for the next international summit, which may not be useful: the earth is burning today, and it is today that we must change, at all levels”, said concluded the Argentine pope before returning to the Vatican by helicopter.