Opening of the trial for the collapse of a balcony in Anger on October 13, 2022 (AFP/Archives/JEAN-FRANCOIS MONIER)

The architect of the “Le Surcouf” residence in Angers, whose balcony collapsed in 2016 killing four students, rejected Wednesday any involvement in the technical design of the building, on the first day of the trial where five defendants appear.

On the evening of October 15, 2016, a festive evening bringing together around thirty friends turns into a nightmare when, around 11:00 p.m., the balcony breaks down and falls into the void, dragging 18 young people in its fall of more than 8 meters.

The five defendants with no criminal records, key players in the building construction chain, retraced their professional career. 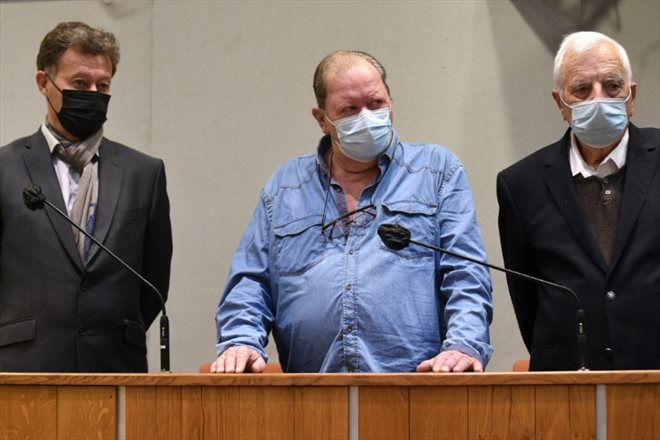 A graduate of the Beaux Arts de Paris and Columbia University, the architect Frédéric Rolland, 66, took over in 1989 the firm that his father had created in 1954 in Angers, and which participated in the reconstruction of the city after the war. . “There was a very well-formed team and already seven private residential projects carried out for this client, the Surcouf being the eighth”, he added, presenting himself as a “man of the art”, turned ” exclusively on the search for the creation of a concept”.

“An architect will never be an engineer or a calculator. At no time do I calculate slabs and reinforcement”, specified the one who was however project manager of the site, explaining that he was formed “with the experience ” to site monitoring.

At the time of the tragedy, Frédéric Rolland was occupied with the creation of a cabinet in Shanghai, while affirming “to ensure in France the follow-up of the aesthetic respect of the work” on the construction sites.

“We remain forbidden to hear him say that for years he has only been practicing his profession for aesthetics, even though he should do it for safety. We are a little shocked”, reacted Me Louis-René Penneau , lawyer for 32 civil parties.

“Did having done these projects abroad allow him to be present locally to follow the construction sites? Obviously not”, commented Laurence Couvreux, another lawyer for the civil parties. “He says he had engineers who carried out the work, but by operating his business as an individual, without the safeguard of the legal form of a company, he must assume legal and criminal responsibility,” he said. -she adds.

Builder Patrick Bonnel, 72, former manager of the eponymous family business, holds a BTS as a works supervisor and joined the company in 1976 at the request of his father. He took care of “the technical part” and his brother “of the studies”.

Asked about his qualifications, site manager Jean-Marcel Moreau, 63, retired, replied that he had no diploma, having learned his trade “on the job” at Bonnel at 18 after working on the farm.

In their conclusions, the investigators had ruled out the responsibility of the guests who were on the balcony and the hypothesis of a lack of maintenance by the trustee.

On the other hand, they severely incriminated the builders: waterlogged concrete, offhand supervision of the construction site, arrangements with the construction rules, bad positioning of the steel reinforcements… Above all, the balconies which were initially to be prefabricated in the factory finally were sunk on site without new plans being made.

A total of 83 people joined as civil parties.

During the investigation, Eric Morand explained that the change in the method of construction of the balconies had made it possible to save 14 weeks on the work schedule.

The trial is due to last until March 4.