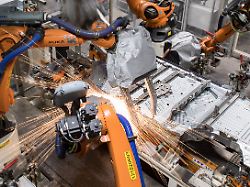 The coronavirus pandemic is far from over. Thousands of new infections are reported in Germany every day. Nevertheless, the mood in the company boardrooms is brightening. This is mainly due to a strong draft horse.

Thanks to the robust industry and the prospect of vaccinations against the coronavirus, the mood in the executive floors of the German economy is improving. Despite the lockdown, the Ifo business climate index climbed by 1.2 to 92.1 points in December, as the Munich Institute announced. This was the first increase after two declines in a row. Economists, however, had previously expected a decrease to 90.0 points.

"It is true that the lockdown is hitting individual industries hard," said Ifo President Clemens Fuest. "However, the German economy as a whole is showing itself to be resilient." The managers were more optimistic than before about the outlook for their businesses and their situation. "The German economy finds a somewhat conciliatory end of the year", summarized Ifo expert Klaus Wohlrabe the results of the survey.

This is mainly due to the industry. "The order situation there is very good," said Wohlrabe. "Satisfaction with the order backlog continues to grow." Export expectations would have increased slightly. "At the moment, however, the demand is primarily driven by the domestic market," said the Ifo expert. This also benefited service providers such as transport and logistics, who would have more to do because of this and the flourishing online trade.

In the companies particularly affected by the lockdown – for example in the hospitality and travel industries – the situation is still "catastrophic". "The division of the economy continues," said Dekabank economist Andreas Scheuerle. "While industry – initiated by the positive global development and reinforced by the subsequent effects on domestic industrial demand – presented itself in good shape, the service sectors affected by the partial lockdown suffered."

Economists, meanwhile, expect Europe's largest economy to grow strongly in the coming year. "The prospect of the early use of effective vaccines and the successes in fighting pandemics in Asia are immunizing the economy and the business climate," said KfW chief economist Fritzi Köhler-Geib. The German economy had recovered in the summer after the corona-related slump in spring and had grown by 8.5 percent.

According to economists, the new lockdown is causing a new setback. The Ifo Institute recently lowered its forecast for economic growth in 2021 to 4.2 percent from 5.1 percent previously. Production will not return to its pre-crisis level until the end of next year. Consumers who recently had to forego travel and restaurant visits are likely to boost the economy thanks to a pent-up demand with their spending.

But the tightening of infection control measures should ensure that the economy is facing a hard winter for the time being. The Ifo Institute expects the gross domestic product to fall by 0.4 percent in the current fourth quarter.