Almost every day, farmer Ait Taleb Abdelloh visits his carob trees on a mountain plateau in southern Morocco, far above his village at an altitude of 1400 meters. He brings the dung of his goats with them, pours them with the water that a pump pumps up from a lower-lying irrigation channel. See what else is missing.

Abdelloh, a strong man of 45, looks at his trees almost tenderly. The mountain wind cools the hot summer air and drives the dust over the dark, dry earth. Abdelloh's right hand encompasses the gnarled branch of a particularly tall two-year-old plant: "I learn every day," he says, a little proud. "It's all new to me."

Abdelloh: A pioneer in the Atlas Mountains

Abdelloh and his family are the first to venture into a new form of agriculture in the mountain village of Tamzndirt, where 120 families live. So far, the farmers have grown grain here in the Atlas Mountains, primarily for their own use. They could not afford slow-growing crops such as carob trees that would only bring good harvests after years – but then for 50 years and longer; the seedlings were too expensive, the waiting period for the first harvest at five or six years too long for them. It's worth it: fruits and seeds of the carob tree can bring considerable market prices. Abdelloh's 13 children will still benefit from it.

A farmer makes a signal, Ait Taleb Abdelloh (left) was the first in the village to farm sustainably.

Morocco has lost about 90 percent of its original forest through deforestation and soil erosion. In addition, the storms become more violent in the rainy season; the many goats of the farmers destroy the last green. In a place where the soil is eroding because there are no roots other than pine and a few cedar species, Abdelloh is planting rows of new deciduous trees; they are supposed to bring their fertility back to the barren mountain slopes, because where they grow, new vegetation can arise in their shade, which secures additional sources of income and protects the soil from further desertification.

Every year, around 15 billion of the approximately 3,000 billion trees on Earth disappear. About a third of the greenhouse gas problem stems from this – where there are no more trees, no more CO2 is stored in wood and soil in the long term. That is why Abdelloh planted the carob trees. For themselves. His family. The climate. The world. That's what he does. 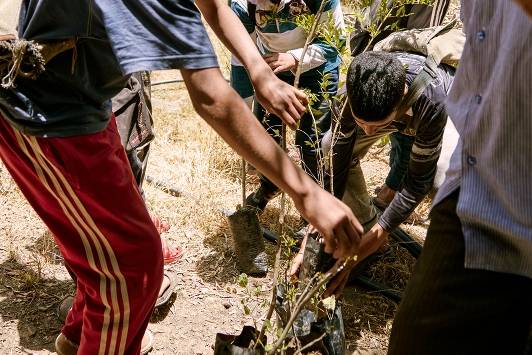 Dry soil, a lot of optimism: A new carob plantation is being built here.

A trillion, a one with twelve zeros. So many new trees would be needed to mitigate climate change now. "To do this, however, all states would have to adhere to the climate targets of the Paris Agreement," says Christian Kroll, founder of a start-up in Berlin, which ensures that farmers in the High Atlas, as in many other places in the world, make the switch sustainable agriculture at all. Kroll, 35, programmer and activist, studied business administration, but then found little point in simply making a lot of money. He traveled, saw the monocultures and the vanishing rainforest in South America, and was so shocked that he decided to do something in his mid-twenties. His idea: to reforest the earth so quickly and comprehensively that the climate change can still succeed.

That is behind Ecosia

Around ten years ago he developed the green search engine Ecosia. It looks similar to Google, but uses the Microsoft search engine Bing. The advertising sales – the machine is financed like any other through sponsored links – go to Microsoft, which pays the majority to Ecosia. And 80 percent of the Ecosia part then flows into afforestation programs. In Brazil, Indonesia – where the trees are big and do a lot to filter the CO2 out of the air. And in regions like Morocco, where the trees have small, gnarled leaves due to the climate and can do less photosynthesis and still help, because only sustainable agriculture can repair the damage that nature has already suffered a little.

If we had profit and market position like Google for 20 years, the problem of climate change would have been solved.

Kroll does not derive any profit from his company, which he has now handed over to a foundation that monitors that all surpluses remain in the company or are donated. So far, Ecosia's market share in Germany has been around one percent. Kroll says: "If we had the profit and market position like Google for 20 years, the problem of climate change would have been solved."

A study by the ETH Zurich has just shown that worldwide afforestation is the effective measure against climate change. According to the researchers, two thirds of man-made climate-damaging CO2 emissions could be offset in this way – but only if action is taken quickly because it takes decades for forests to develop their CO2 storage potential. Other green companies therefore prefer to prevent further deforestation, for example by means of solar collectors in rural households or energy-efficient stoves. This is how the non-profit company atmosfair does it, on whose side everyone can make a compensation payment for their air travel.

The company received 9.5 million euros in compensation payments last year, 60 percent from private travelers. A tree costs Ecosia an average of 20 cents, an average of 45 searches are required. In order to understand what the use of the page brings, a counter with a tree symbol runs along the top right. So far, more than 60 million trees have been brought into the world by Ecosia users. 1.4 million of them in Morocco. 500 are on Abdelloh's field. 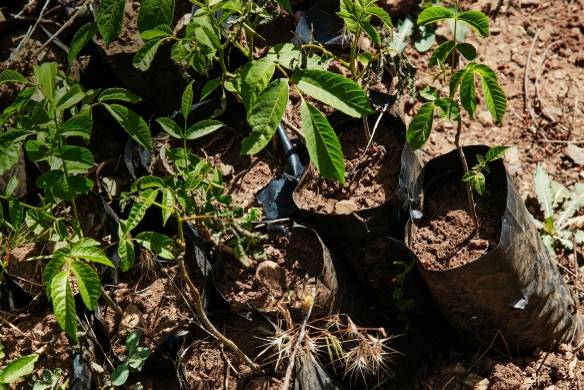 It's about survival: Ecoisa only counts those seedlings that survive the first three years after planting.

Ecosia's tree counter only names plants that survive longer than three years; if they are planted in a region where statistically a quarter of the young trees die, the counter calculates them in advance. "Planting young trees is not that difficult," says Kroll. "It is more difficult to make sure that they survive."

That is why Ecosia chooses its global partners carefully: farmers who understand soil, planting concepts that fit the region. In Abdelloh's case, the Moroccan NGO High Atlas Foundation, which operates 15 nurseries in the High Atlas – almond, fig, lemon, walnut, olive, cherry, carob trees. It combines sustainability and village development and distributes the seedlings to the farmers at a low price who, until the plants are profitable, can earn money as employees in the tree nurseries. The Foundation has planted more than 3.6 million trees and other plants since 2003 – financed with US and local funds. 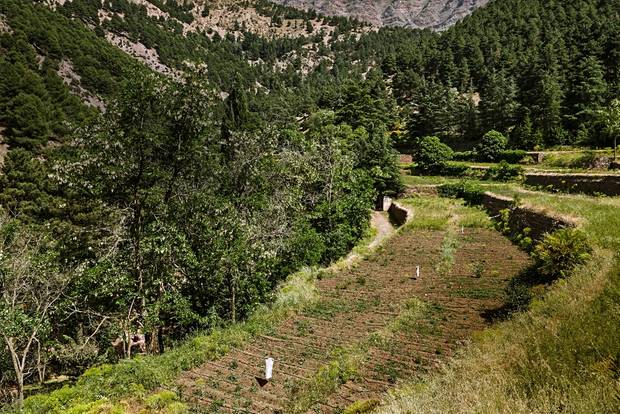 Plant from scratch: One of the nurseries in the High Atlas. This is for walnut seedlings.

Four of the 15 nurseries are currently financed by Ecosia, the company is giving 248,000 euros to the Moroccan partners for two years. To do this, it requires meticulous documentation on site, as if each stem was a lump of gold. The planting date, development and later location are recorded in the tree nurseries and entered on digital maps. Every planted tree is listed, every hectare planted is photographed, the coordinates are saved with Geo-Tag. The names and data of the farmers or family on whose land is planted are also recorded.

Google receives an average of 65,000 searches every second.

Search the web and plant trees

The principle is very simple: set Ecosia as the start page (for Safari, Firefox and many others) and search. 45 searches fund a tree that Ecosia partners plant. The search engine runs its servers with solar power.

Four out of five companies in Europe now have their own climate agenda: some tie their managerial bonuses to certain sustainability goals, others impose voluntary commitments, such as Bosch, which wants to become CO2 neutral by 2020 – initially through more green electricity and compensation , later on my own. Others take more time: The energy giant Vattenfall, for example, plans to switch to energy production without fossil fuels over the course of a generation – late in light of the climate targets. According to a survey by the "WirtschaftsWoche", many of the big players continue to link their growth to their previous emission values. A third of the Dax groups even emitted more CO2 in 2018 than in 2017. Only around 30 percent pay compensation.

Would you like to read more about the topic and exchange ideas with other women? Then check out the "Science and Environmental Protection Forum" BRIGITTE community past! 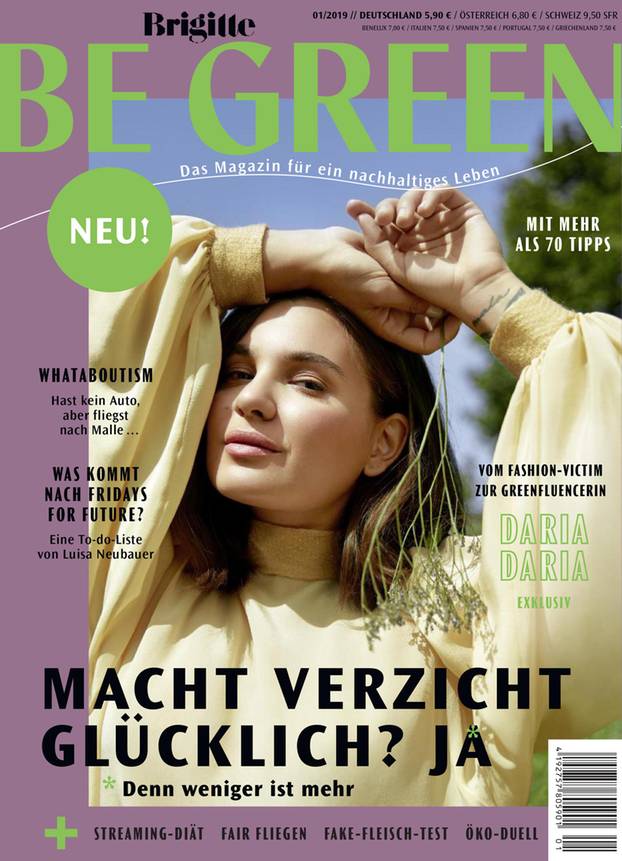 In BE GREEN, BRIGITTE's new sustainability magazine, you can read the exclusive interview with Greenfluencer DariaDaria, in which she demands: "We have to redefine time!"