Spartacus: Phil Spencer (Xbox) does not fear the merger of PlayStation Plus and Now at Sony

Covid-19 Blanquer “regrets the symbolism” of his vacation in Ibiza

Quarantine with a child: what should I watch out for now?

Growing vegetables yourself – these varieties ripen on the windowsill in winter

The bird flu epizootic is swelling in France and has now reached 151 farms, two-thirds of them in the Landes (AFP / Archives / GEORGES GOBET)

The bird flu epizootic is swelling in France and has now reached 151 farms, two-thirds of which are in the heart of foie gras country, in the Landes, where the high concentration of farms promotes the spread.

The progression is dazzling: in just 24 hours, 21 new farms have been affected by highly pathogenic avian influenza, known as avian flu.

“The virus is active and circulating. The Landes are particularly affected due to the concentration of farms in this department”, it was explained to the Ministry of Agriculture, while wanting to be reassuring: “today we have three times fewer farms affected than last year on the same date”.

In 2021, the crisis – the third since 2015 – had ended up being stemmed at the cost of the slaughter, often preventive, of more than 3.5 million poultry, mainly waterfowl and very mainly in the South-West.

In detail, of the 151 infected farms in France, 94 are in the Landes, 28 in the Pyrénées-Atlantiques, 16 in the Gers, eight in the North, two in Vendée and in the Hautes-Pyrénées and one in the Lot. -et-Garonne.

In addition to farm contamination, 21 cases were detected in wildlife and five backyards were affected.

At the end of December, the bird flu had already led to the slaughter of around 650,000 poultry in one month. The balance sheet on January 13 for the slaughter of ducks, geese and other poultry was not yet known.

France has around 20,000 poultry farms raised for meat, eggs or foie gras.

The virus was identified for the first time in breeding on November 26 on a farm in the town of Warhem (North) where 160,000 laying hens were raised all year round in buildings.

On December 16, he arrived in the South-West: a first outbreak of the H5N1 type was confirmed in a breeding of ducks ready to force-feed in the town of Manciet, in the Gers. Animals in affected homes are systematically slaughtered. 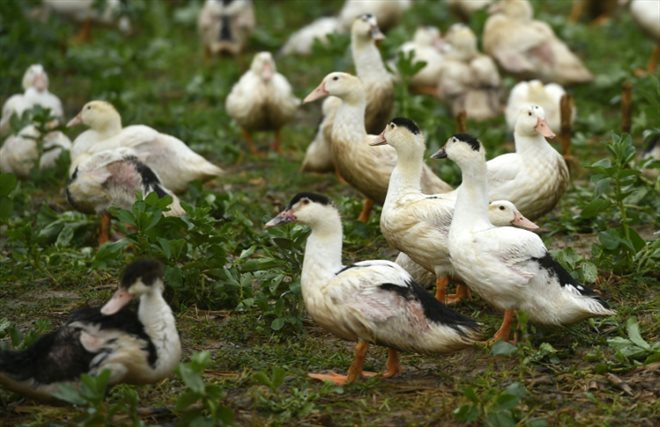 To reduce the risk of contamination, the health authorities asked all outdoor and organic producers from the beginning of November to confine their poultry in order to avoid contact with migratory birds potentially carrying the virus. But the first cases were detected in conventional farms, in buildings, reviving the anger of the agricultural unions Confédération paysanne and Modef who denounce the obligation of confinement.

Since then, the epizootic has spread and the criticisms have been harsh.

“Are we at the gates of a new massive depopulation of the south-west?” Ask the Peasant Confederation and the Modef, noting that “claustration, the government’s flagship measure”, supported by the majority union and the largest actors in the sector, “has therefore not been able to avoid a fourth crisis in six years”.

“There is only one possible way to stop this infernal cycle (…): it is essential to lower the extreme densities of certain territories in poultry”, they plead in a joint press release, calling for “putting end to the segmented operation of poultry sectors (different places of laying, breeding, force-feeding and slaughter, editor’s note) which disseminate viruses by the transport of live animals, products or sustained flows of stakeholders”.

From the first case in breeding, France had lost its “free” status from avian influenza, which it had just regained on September 2.

Markets then automatically closed (South Africa, China, Korea, Cuba, Madagascar, Philippines, etc.), hampering, for example, the marketing of day-old chicks and ducklings or animal parts not consumed in France, such as duck’s legs and tongues or rooster’s combs.

France is not the only one affected, in this period of migration of birds from the Baltic to the temperate zones of the south: twenty-nine countries are today affected on the whole of the European continent which lists nearly 400 outbreaks in breeding. and 700 cases in wildlife, according to the latest report from the Ministry of Agriculture.